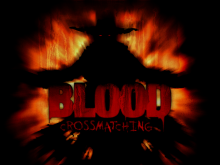 A separate "Blood Weapon Mod" adds the weapons of Blood to Duke Nukem 3D separate from the rest of BloodCM (mirror - RTCM).

Makarov has now moved on to working on BloodGDX, an actual attempted port of native Blood assets using the libGDX framework for Java. Such an effort can be considered to be more secure legally, as it only is reading the original game's assets (and requires the purchase of the original retail version) rather than reconstituting them into another game as BloodCM does. Legal questions still persist around reverse engineering and the referencing of the leaked Blood Alpha source code. Makarov also stressed his desire to move beyond EDuke32's current limitations, such as inoperable multiplayer support, among others.