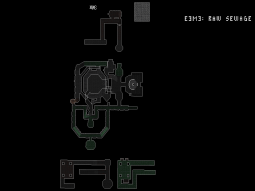 Raw Sewage (E3M3) is the third level of the third episode in Blood. It takes place underground in a sewer system. 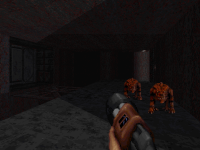 "Walk forward, down the stairs, and into the water. You'll find an underwater passage at the end of this corridor. Enter it, and you'll come to a room with two valves. Turn them both, and a passage will open over to your right. Follow the newly opened passage, surface, and go up the steps into another passage. Follow this one until you get back into the sewage. At the first fork, take the left path, and follow it along until you see a hole overlooking a large pool of sewage. Jump into it, and underneath the waterfall (sewagefall), you'll find an underwater passage. Follow it to a larger area with the Skull key and a passage to the right of the key. Grab the Skull key, and exit through this passage. Follow it, and when you fall down, push the switch next to the gate to open it. Go through the gate, surface in front of the Skull key door. Enter the Skull key door, and follow the passage until you get to a large room with several metal bridges over it. Enter into the lift over to your right, and take it up to the next level. Cross the bridge, and follow the path along until you get to a metal door. Past that door is a room with some bedding and a lift. Take the lift up, and you see the Eye key door over to your left, and a bridge. Cross the bridge and open the door. On the other side of this room is a button which opens causes the circular thing in the middle to spin around, revealing the Eye key. Grab it, and use it to open the Eye key door. Follow the passage, and you'll see the Fire key and another Eye key door across the bridge. Grab the key, and go through the Eye key door. Follow this passage all the way around, across another bridge, and open up the Fire key door. Push the symbol to end the level."--Baytor's Guide