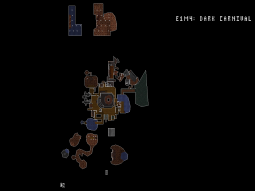 Dark Carnival (E1M4) is the fourth level of the first episode in Blood. The level resembles a circus or carnival, consisting of rides, carnival games, and a freak show. This level also holds access to the secret level, E1M8: The House of Horrors. 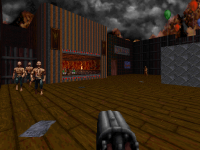 "Walk forward until you get to the over-turned coal car, and turn to your right. You'll see a passage in the rock face. Enter it, and follow it along to the carnival entrance. Jump down and head down the path to your right, across the little wooden bridge, and into 'Cougar and D'arc's Pandemonium Shadow Show'. Walk past the ticket taker, and straight along until you get to the ramp. Take note: the Moon key door and another ramp are over to you left. Go up the ramp, and turn to your right for some more fun and games. Walk by them all, JoJo the main attraction, so follow the directions on the sign and go to the left. Open the door to the JoJo attraction, you'll see two pillars and a high wire between them. Go to the pillar on the left and push the button to ride the lift up, walk across the high wire, collect the Dagger key, and walk back over the wire. When you get back across, push the button to call the lift back up, and ride it down. Turn to your left and go out the door under the 'Exit' sign. You'll find yourself in another part of the carnival. Turn to your left, and walk all the way to the end, then turn right, and you'll see the Dagger key door over on your left. Enter the Dagger key door, and you'll find the entrance to the ticket booth with the Moon key. Grab it, and walk back out to the carnival. Take a left at the Punch-O-Meter, and enter the Happy-Go-Pukey using the Eye key. Fight the gargoyle and pick up the Moon key. Go through the passage under the 'Exit' sign, and you'll find yourself across from the Moon key door. Enter the Moon key door and you'll come to a bridge that will blow up just as you turn the corner. Now you could be boring, and jump in the water, take the underwater passage over to your left to Level 5. Instead, use the pillars to jump across to the other side. Blow the crack in the wall from the last pillar, then jump over. Dive into the small pool of water, swim through the underwater passage, and surface into a small cave. Before you, you'll see a stone with three skulls on it. Push the skulls to the following combination: Dagger, Eye, Moon. And it's off to the secret level."--Baytor's Guide

"It wasn’t just a shooting gallery, but a whole collection of fun little distractions like kicking heads into targets, tightrope walking across a snake pit, and even access to a bonus level set in an evil haunted house. Encountering it was a balloon-popping journey into charnel house whimsy that, like Duke Nukem 3D, really helped sell what we could look forward to in the next generation of shooters. The one after the crap early 3D ones, of course. Best of all, you could kill mimes. So many mimes. In many horrible ways. While the rest is obviously pretty simple by modern standards, some pleasures just don’t get old. Unlike every mime act ever. Burn!"--"Great moments in PC gaming: The Dark Carnival level in Blood", Richard Cobbett, May 29, 2018 (PC Gamer)