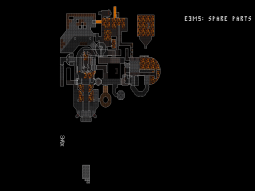 Spare Parts (E3M5) is the fifth level of the third episode in Blood. The level resembles a furnace or factory of some kind. 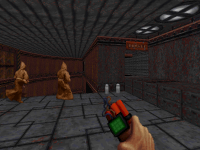 "In front of you is a switch, but you can't activate it yet. Instead go through the door over to your right, follow the path around, and go up the stairs. At the top of the stairs, there will be a locked door to your left and a conveyor belt in front of you. Get on the conveyor belt, and carefully go through the crusher. At the end of the conveyor belt, turn to your left, and go out onto the ledge. Push the switch, and now you can activate the switch from the start. Retrace your steps, push the switch, then go back up to the locked door. After you go through the door, you'll find another locked door. Push the button next to it, and duck. The lights will dim for a little while, flamethrowers will try to burn you, and finally zombies will try to kill you. After all this, the lights will come back on, and the door can now be opened. In front of you will be another metal door with a panel next to it. Don't mess with the panel, and just open up the door. Enter it, and you'll see another panel. Activate this one, and the room will spin. When the next door opens walk out, and look to your right. You'll see a raised platform with two buttons. Look down, and you'll see a slope. Jump down on it, walk around the back, and ride the lift up. Hit both buttons, and jump back down to ledge, and walk up the ramps to the tubes in front of you. You'll see a lever next to it, so push it. Now turn to your left, and you'll see a door marked "No Admittance." Quickly step into and out of the room, and you'll just miss getting smashed. Now go back toward the lever, and continue following the path into the area bathed in red light. Go through the metal door, and down the ramp. You'll see a door with a panel next to it. Push the panel, and the ramp will fall down revealing a small room with a cultist and another panel. Push that panel, and the door will open, revealing a black and yellow striped door and another panel. Push the panel, open the door, and go down into the next room. On the other side of the room is a switch, which will open up the furnace. After pushing the switch, jump up to where the Guns Akimbo are, and jump down into the hole. Quickly move away from the furnace, and up the conveyor belt (be careful of the crusher). Ride the conveyor belt down, and turn your left when you get into the next room. You'll see another conveyor belt and a lift. Ride that conveyor belt up to the lift, then take the lift up. Walk across the catwalk into the small office with three switches. Push the left and the right ones (don't touch the one in the middle), and the Skull key will eventually appear behind you. Grab it. As you walk out of the office, you'll see a couple of cultists shooting at you from a newly opened window. Jump in the window, and go through the Skull key door. Go down the ramp, and through a door. Turn to your left, and you see Skull key door. Go through it, and go up the lift. Cross the catwalk, and you'll see, yet another Skull key door. Go through this one, and push the symbol to end the level."--Baytor's Guide