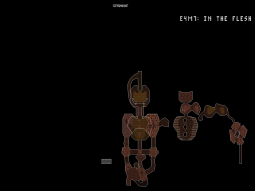 In The Flesh (E4M7) is the seventh level of the fourth episode in Blood. It takes place in what appears to be a body, including a stomach, lungs, and ending in a pumping heart. 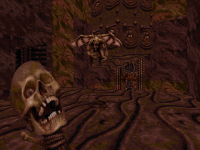 "Go down the fart elevator to your left. Follow the passage to your left into the next chamber, and go half-way down the passage to your left. Turn to your right, and follow the ramp down. As you go down, the pillars will lift up (not important to the walkthrough, just mentioned as a landmark). Jump into the green slime, and swim forward through the small hole in the wall. Don't surface in the next room (you'll come back to this room later), but continue on into the hole you see in front of you. Surface, and walk into the narrow path with the gillbeats in it. Push the skull symbol at the end of the path. Now jump back into the green slime, back through the hole you came through, and now surface in this room. Behind you, you'll see a passage. Follow it, and push the skull symbol. Turn around, walk back down the passage, around the two pools, into another passage. This leads into the heart, and as you make you way around the chambers, you'll find a hole in the wall. Jump into it, and push the symbol at the end of the passage to end the level."--Baytor's Guide