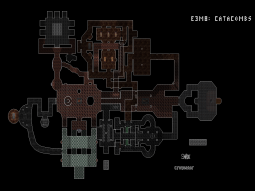 Catacombs (E3M8) is the secret level in the third episode in Blood. It is accessible by accessing a hidden door in the chapel in E3M4: The Sick Ward. 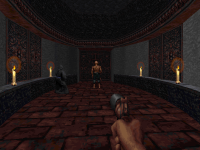 "Make your way forward to the double wooden doors. Go through them into an ornate room, and take the passage over to your right. Follow it down, until you get to the Eye key door. The passage to your right is blocked by bars, so take the passage to your left. Follow this path to a wide wooden door, which opens up to the entrance to the catacombs. Once in the catacombs, take the first right. You'll see two different Skull key doors down this path. After the second Skull key door, the path will go around a corner, and you'll see some candles lit up. In the second niche with candles, you'll see the Skull key on top of a tomb. Grab it and walk back to the wooden Skull key door. Enter it, and follow it around until you get to a switch. Pushing the switch will open bring you back to the ornate room. Go back toward the Eye key door, and you'll see that the bars on the right passage is no longer there. Follow the passage until you get to the room where the door closes behind you, and you're ambushed. Kill everybody, and go down the passage to your right (it should open up for you, but if not, there's a button in one of the alcoves which should open it up for you). Go down the steps, and you'll be back in the ornate room again. Go across the room, and you'll see a switch on the right side of the room. Pushing it reveals a spiral staircase to your left. Climb it, and follow the passage along (you can take either fork) to the Eye key. Grab it, and the entrance will close up, trapping you in their with some zombies. After a little while, it will open back up, and make you way back to the Eye key door. Go through the Eye key door, and you'll find an alcove with a lever. Pull it, and a button will be revealed behind you. Push it, and a door will open with the symbol you need to push to end the level."--Baytor's Guide