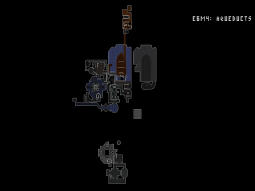 Aqueducts (E6M4) is the fourth level of Plasma Pak, an expansion for Blood, also known as Episode 6. It takes place at an aqueduct facility. 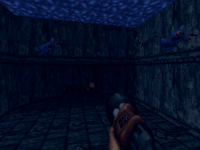 "Make your way around the crates, past the 'Stay Out' sign, and find the switch in the next area. It won't work until you turn the power on, so turn to your left, and go down the ramp. Blow up the TNT barrel on top of the machinery, and get the Diving Suit. Now, break the window, jump into the pool of water, and follow either one of the underwater tunnels. When you get to a fairly large area, swim up into the control near the top of the room. Quickly push all three buttons to turn the power back on. Now retrace your steps to the switch that didn't work earlier. Hit the switch, and go through gates that open up. Jump down into the water, and make your way around the underwater area to retrieve the Skull key. After picking up the keys, look around a little, and you'll find a passage (facing the key, it's over toward your right). Follow it along, and surface into a secret area. Push the button to open the wall. Walk through the newly opened wall, and walk across the walkway to your right. Hit the switch, wait for the room to rotate, and walk across the walkway to the Skull key door. After going through the Skull key door, follow it along until you get to the room with the Electrical beams. Go through them, and enter the passage on the other side. After you climb some stairs, you'll come to a switch. Hit it, and the stairs you just climb will flip. Now climb up the stairs again, follow the passage, and get the Fire key. After you get the key, turn around, and jump down on the left side. Go up the ramp, and you'll soon find yourself back in the spinning room (use your auto-map if you get lost). Hit the switch, and head toward the Fire key door--it's at the other end of one of the walkways. Go through the Fire key door, and through the door on the other side of the room (remember to open the cabinet next to the door to get another Diving Suit). Smash the window to your left (wait a moment and the cultists will do it for you), jump onto the ship, run straight across, and jump off the other side. Turn around, and blow the crack on the side of the ship. Once the explosions subside, jump back onto the deck, and go through door. On the other side of the partially submerged room, you'll find an underwater passage. Go through it, and you'll find a large wooden door on the right side of the next room. Go through this door, grab the Spider key (and the Diving Suit behind the crates), and go back through the door. Go forward, and around the corner, you'll see the Spider door in this room. Enter it, and get the Moon key. Now retrace your steps to the Spinning room. Take the other walkway to get to the Moon key door. Hit the switch, and go through the newly opened door. Follow the passage along, and jump in the water. Go with the flow, and hit the underwater symbol to end the level."--Baytor's Guide