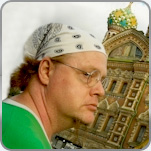 "Rick Raymo has been happily crushing and crunching his way through his days in the game industry with a childlike joy and enthusiasm for 21-plus years. After starting as a freelance journalist writing for papers and magazines, he decided he was sick of complaining, and wanted to do better. Thus the whole producing games bit. He’s gotten to work with heroes and unsung stars, killed more games than he’s completed, and made a large swath of good ones in the process. Rick has been involved with demo coders at nearly every chance he’s had; from folks like the former Future Crew or Remedy to the wonderful Digital Illusions. Rick has directed first-party for a console company, managed game studios, and worked for publishers and vast media conglomerates. Rick is happily working for Saber Interactive as director of game content and chief instigator, and sees Saber as the best multi-SKU independent studio on the planet. He tries to think he’s not biased."--Level Up 2010 Judges

Rick Raymo was a producer for Blood (and "Lead Atmosphere Monger"), the Plasma Pak and Blood II: The Chosen ("Lead AtMosFear Monger, Ghost-Writer For "The Voice" (blame him!), Feature Beggar, Catering Services, Keeper Of The Whip, and er, That GT Producer-Type") at GT Interactive. He has been most associated with Duke Nukem 3D and related projects such as Duke Nukem 64, Duke Nukem - Zero Hour, NAM (worked on by Matt Saettler), Balls of Steel and Shadow Warrior; in April 1997 he and Paul Schuytema (then Prey project leader) accepted the second Spotlight Award given to DN3D. He has also worked on Oddworld: Abe's Exoddus, Death Rally and Max Payne, and he has produced and contributed ideas to well over 30 titles in a career spanning over 20 years. Before producing he worked as a freelance games journalist and editor of GameMag.

Since March 2007 he has been the director of game content for Saber Interactive at both their New Jersey headquarters and production studio in Saint Petersburg, Russia. Other companies he has worked with include I.D.G., GameSpy, Red Jade, Interactive Studio Management and Hudson Soft. Prior to joining Saber, he was the production executive for HBO Interactive Entertainment leading efforts to create interactive projects out of HBO's internal properties, most notably with The Sopranos: Road to Respect. He was also the co-author of the Phantasy Star IV Official Players Guide with John Sauer, and a judge for the 2010 Level Up game design contest ran by Intel.