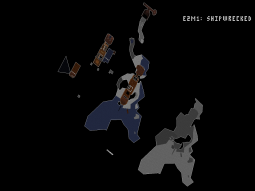 Shipwrecked (E2M1) is the first level of the second episode in Blood. It depicts the start of Caleb's journey to the frozen north to find the lair of Shial. Since this is the beginning of a new episode, the player starts with none of his weapons from the previous one, although there is a shotgun to start. It starts on a rowboat, floating towards a large ship buried in an iceberg. 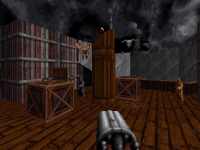 "Ride the small boat until it stops. Jump out, and up on the ship. Turn to the right, and jump into the hole. Kill everyone and collect the Fire key. Hit the switch on the wall, and a crate will lower, enabling you to jump out of the hold. Now walk all the way to the front of the ship with the locked steering wheel (requires Moon key). Kill the cultist carrying the Eye key. Get the key and retrace your steps until you see the Eye key door. Turn around and you'll see another Eye key door, enter this one. Go down the ramp, and you'll see the Skull key door over to your left. Turn to your right and follow that passage. Keep walking past the Dining room, down the hall with the TNT barrel at the end. Blow it up, and enter into the water in the hole to the right. Swim down, look to your right, and you'll see the Fire key door. Open it, and get the Skull key. Now retrace your steps to the Skull key door. Enter the captain's quarters and grab the Moon key door. Now go back up to the deck, activate the steering wheel, and a cavern will open up to your left. Jump out of the boat, enter the cavern, and jump in the small pool. Follow the underwater passage, surface, climb the stairs, and push the symbol to end the level."--Baytor's Guide