The Voodoo Doll is a magic weapon in Blood and Blood II: The Chosen.

"The power of the voodoo doll is immense, but far subtler than that of a firearm."--Blood Manual

The Voodoo Doll occupies slot 0 and, like the Aerosol Can & Dynamite, comes in its own units (meaning the only way to obtain ammo is to pick up more Voodoo Dolls). It works by pointing at a victim and plunging a needle into various parts of the doll. The victim will react as if it was shot. However, if there is no target in range, Caleb will accidentally stick himself with the needle, causing damage to himself.

It has an unlimited range and does heavy damage, ignoring armor. Flesh victims who die from the Voodoo Doll will melt into a puddle of flesh. The alternate fire causes the victim whom it is aimed at to die instantly whilst damaging, to varying degrees, every enemy nearby him. It is unreliable however due to the fact that it consumed ALL remaining ammo (20 ammo in versions up to 1.10), but regular fire is very effective. But due to its low ammunition capacity and rarity, this is an excellent sniping weapon or useful on large enemies like Stone Gargoyles.

"It picks the closest target to the player and hurts it. Some monsters are more...affected by voodoo magic. Zombies, for instance, are greatly affected by the voodoo doll and disintegrate when destroyed by its power. In Bloodbath [multiplayer] play, the voodoo doll attacks have a different effect. For instance, a stab to the groin does a monumental amount of damage. Stabbing the voodoo doll in the eye will blind your victim for a short time. Fun gameplay is still important, though, so we don't just blank the screen to blind the other player. Blood darkens the screen cumulatively, so the more eye shots you get in, the more blind the victim becomes. Sometimes you can even make the other player lower his weapon by nailing him in the shoulder. The voodoo doll truly rocks in Bloodbath mode, but the napalm launcher and Hellstaff really have our attention right now."--Nick Newhard

"The Voodoo doll is a vector-based weapon that does damage specific to where it hits on the doll. When the player uses the primary fire it will randomly stick the pin in several places all over the doll. These places include the eyes, chest, arms, legs, and groin. Each different hit location has a different effect."--Blood II: The Chosen Manual 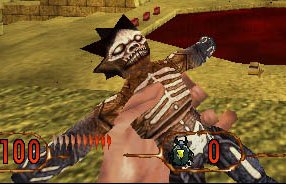 In Blood II, the Voodoo Doll becomes vector-based, meaning it will cause damage to whatever part of the Voodoo Doll was hit (arm for an arm, leg for a leg, etc.). Like the original game, it will damage Caleb if no target is in place.

AMMO TYPE: None (Focus)
REGULAR FIRE: Plunge a knife into the voodoo doll to cause damage to the target
ALTERNATE FIRE: Wave your hand around the doll, using all of its remaining power at the target