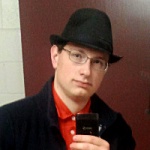 This is the user page of the head moderator of this Wiki. For the Blood character see: Tchernobog

Hamish Paul Wilson, known on the Blood Wiki as Tchernobog, is one of the founders of the Blood Wiki and continues to be one of the principle administrators and moderators. He remains an active Bloodite and typically has at least one game of Blood or Blood II going at any one time, and they are never going to leave his desktop.

He is also a fan of many other older games as well as some more modern independent titles, and is a strong advocate for both GNU/Linux native and DRM free gaming. He graduated from high school in 2013, and what free time is not taken up by his gaming is often consumed by his other pursuits including free software development, writing, politics, and farming, with both cattle and chickens under his care.

In addition to his role on the Blood Wiki, he is also a moderator for two other fandom wikis and is part of the editorial team for the popular GamingOnLinux website.