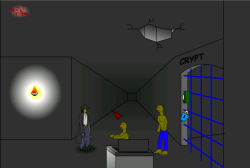 Blood: The Flesh Game is a small Flash adventure game mixing elements from Blood and Blood II: The Chosen starring Caleb. It was uploaded to NewGround on October 30, 2006 (Halloween Eve) by Tamás Tóth (Squall85). It is only available as a demo version, that the author intended to finish but claims to not have had time. The game is rated "mature" for "excessive violence" and it generally received positive reviews despite its shortness, some going as far as to say that it was their "favourite Flash game."

As the game is Flash-based it should run on Microsoft Windows, GNU/Linux, Mac OS X, and many other operating systems. The title "The Flesh Game" was chosen as it sounds like "The Flash Game" and "flesh" is a common word in Blood lore. The graphics were created by Tamás Tóth (except the Blood II "Caleb and the Moon" image) and the rights to which are his property. The sounds and music (and the Blood II "Caleb and the Moon" graphic) are from the official Blood games and are owned by Monolith Productions.

The Flesh Game in many ways appears to be set during the second episode of Blood, such as the winter motif, hedge maze (also seemingly modelled after C5L1: Cold, Cold Grave), Blood era cultists, and the messages from the sixteenth incarnation of Tchernobog. Though there is no official setting for the game, and some Cultists wield CabalCo death ray type weapons and Caleb uses a Blood II type time bomb and pistols. Also take note that the list entries here are not the official names for the areas, as they are never stated. The list also has areas that are cinematic only (such as Darkening Sky and Graveyard).

Caleb's adventure begins outside a large red building surrounded by Cabal sharpshooters. The player's first action is to enter the house (the only other option leads to instant death). Caleb then finds himself in a well furnished room guarded by a man eating plant (in some ways similar to a Chrysalid Pod). After blasting the plant he proceeds down right where he approaches an area that has a dining table (with a plate of blood and a bite mark on the surface), a painting and a window. He has the option of heading right but if the player takes it Caleb is shot by a cultist through another window. Caleb has to open the previous window by selecting the pull string, then break the window and blast the cultist (before it fires back). Now he has two options, head to the basement or the attic. The attic turns out to be locked so you can only go down into the basement. The first basement area contains a wooden box, if you shoot the box the whole building explodes. However if you shoot the box's lock you get access to a bomb! Once this is completed Caleb proceeds right where he meets two zombies. The player has to click on Caleb's bomb holding hand to retrieve the explosive and then blow the two ghouls to pieces (if he does not have the bomb Caleb dies no matter what). Afterwards he enters a room where a zombie breaks out of its coffin and runs outside, then the wall mounted phone rings. Once Caleb picks it up he hears Tchernobog decree "You'll know what to do when the time comes."

Caleb proceeds to walk out of the building into a graveyard while dusk is breaking and nearby he finds a garden hedge maze. The player must navigate Caleb by moving the mouse and not collide with any hedges (the game is now in an overhead mode). If the player clicks on the ground Caleb freezes. Once reaching the exit gate Caleb attempts to open the lock on it to no avail. So he has to approach a sector where Caleb sees a skull key. Once there, the player is faced with a frozen "Johnny" (eg: Jack Torrance from The Shining) and an incoming zombie. Caleb has to grab a Voodoo Doll from Johnny and use it on the Zombie before continuing on through the maze. With the skull key Caleb unlocks the gate of the hedge maze, where he finds himself near some concrete columns, many of which are structurally insecure. Upon pressing the front left one a cloak of invisibility appears, which Caleb grabs and uses it to greatly impede the Cabal by firing through a large group of cultists and fanatics (if you do not have the cloak it all ends in tears). Now Caleb is in a body infirmary where he walks up and is blocked by a metal table. Caleb pushes the table which awakens a zombie lying on one of the push beds. Caleb's quick reflexes allows him to blast the villain though. Caleb then enters an area with three doors, one of which is marked "Exit." A phone descends in which he once again hears the dreaming god, "Two doors lead to certain death. Choose wisely!" If the player clicks on the wrong door then Caleb is crushed and mutilated. The left-most door is the correct one (which is the same pattern as the correct door in E1M5: Hallowed Grounds, as well as the painting in the dining room, hence the "You'll know what to do" comment. It also is not the one marked "Exit"). Caleb then escapes from the complex and a text screen appears telling why the author never completed the full game.

The Flesh Game contains many Caleb quips from Blood, Blood II: The Chosen and those game's expansions. Here is a list:

Tamás Tóth had previously stated that he might build a Blood Flash platform game at some point in the future (stated in late 2007). Partly inspired by this Blood Wiki article, he announced work on it on August 5, 2008. One of the first things completed was the extraction of sounds from Blood and Blood II: The Chosen to use in the game. After a discussion with some commenting users, he decided to draw the sprites for the game himself, rather than use sprites from the games. As well as coming up with ideas himself, he is asking the community for help with the storyline and design.

Some Flash files, containing the in-progress engine were released. These include Caleb with a fully usable arsenal of a Pitchfork, Sawed-Off Shotgun, Tommy Gun, Dynamite Bundle, Aerosol Can, Napalm Launcher, Tesla Cannon, and Life Leech. There is also a body canister, a flame guy, and a barrel on a primitive untextured map.

The development then slowed down, as Tamás Tóth needed to focus on academic work. Development resumed on April 22, 2009, when he released a demo showing off the new Cultist animations. This was followed in May with a demo showing off Fanatic, Innocent, Axe Zombie, and Phantasm animations. With these new graphics, as well as the older Caleb graphic, User:Gideon made a little promotional wallpaper on June 9, 2009. Tóth is now keen to start making these animations into actual enemies though development is still highly sporadic.

After another absence more news was released on September 21, 2009 when he posted a mention of wanting to let Caleb swim. He got one posative response and coded it in, and released a demo of it on February 28, 2010 based on an updated version of his earlier map demo. He also released a new file containing animations and drawings for the Bloated Butcher, Hand, Bat, Hell Hound, Gill Beast, Bone Eel, Rat and Spider. He also mentioned the possible addition of enemies from Blood II and he is asking the public what their favourite Blood II creatures are.

Back again at the end of July 2010, he announced that he "successfully finished the school so [he now has] a diploma, now [is] a professional engineer of computer technology. Or something like that." He also stressed that development has been ongoing in the area of animation and other efforts and that hopefully the next playable demonstration should feature enemies that the player can dispose with in a variety of ways. As of July 2011 he has stated that he is still working on the project.