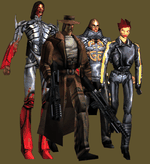 "Caleb, Ophelia, Ishmael, Gabriella - these are the Chosen. Former generals of a defeated god, they must now fight the Cabal together in an uneasy truce. What are their true ambitions?"--Blood II: The Chosen website