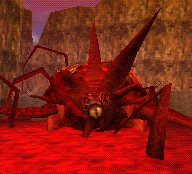 The Ancient One is the final boss of Blood II: The Chosen, living in Reality Beta. Little is known about it, besides that it is the apparent driving force behind the intrusion of our reality by creatures like the Shikari, Naga, Behemoth and Bone Leech. It is never referred to specifically in dialogue, but Ishmael does go on to acknowledge some of its effects:

"There is another reality forcing its way through the rifts, ancient and ravenous. It is neither good nor evil, it merely is, but it will devour us all, hm, yes."--Ishmael, C2L9: The Underground

The loading interstitials also do not make a direct mention of it until C4L1: Beyond the Rift.

The Ancient One appears as a giant amorphous blob resembling a squid or sea urchin, resting in a pool of red liquid (most likely blood). Tentacles rise from its body that can whip the player if he gets too close. The Ancient One does not speak face-to-face, but does communicate using representative bodies in the forms of the Undead Chosen in the level previous.

Its immobility makes it fairly easy to kill, and lacklustre as an end boss. It can fire a very fast explosive blast and lasers from its eye.

There are various power-ups and ammo scattered about, making the battle even easier, although most of the arena is composed of scattered rocks. The Vulcan Cannon and Napalm Launcher make excellent weapons in this battle.

The Ancient One is similar in style to Cothineal from the sister game of Blood II, Shogo: Mobile Armour Division, as both seem to share a design similar to the evil deities of H.P. Lovecraft's Cthulhu Mythos. Its general appearance and immobility also make it similar to the final Shub-Niggurath boss in Quake, which the Blood developers had once mocked as a "lazy slug".