He finds himself at an airport, and proceeds to visit the local shops such as a pub, a kebab restaurant, and souvenir and book stores. Breaking into the cargo warehouse, Caleb slips out the back into the adjacent alleys, dodging a careening truck. However he then stumbles through a grate into the midst of a large gathering of Cabal worshippers. "This looks extraordinarily bad" Caleb mutters before being captured, crated and shoved aboard the nearby boarding plane. 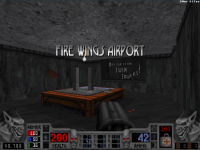 "Now then this was a force to be reckoned with! Seriously it was ludicrously tough! The Cabal are everywhere and in high numbers! It's a good thing you were generous with Life Essences as at one point I accidently ran into a group of Fanatics on the upper floor and had to double back, but the tremendous thing was I then approached them from the opposite side and took them by surprise! Good job on the room over room with reflective floor touch though... Yes It was a very good tribute to 'Wrong Side of the Tracks' considering you retained the Rare Books Shop and Bar, I think by this point I was wondering whether I had missed the Tesla Cannon, whether it was in a secret or not because I found a secret which had Tesla Charges but hmm still no weapon to contend with! The secret with the 3 Zealots was humorous to say the least, Oh gee a secret and turns out it's probably one of the worst damn encounters in the entire level... My favourite aspect without the doubt was the end"--Krypto