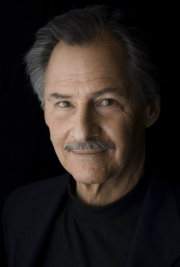 "I do remember that it was fun for me to come up with my singing adlibs; they were not in the scripts. Computer geeks and gamers aren't performers; don't come from that background, so I had to supply the icing on the cake. Perhaps, because Caleb is so different from other game characters, that's the reason why, even now after 10 years or so, I still get lovely comments about my creation from all over the world."--Stephan Weyte

Stephan Weyte (born September 15, 1941, sometimes misspelled as "Stefan" or "Stephen") is a voice actor for computer games, most importantly Caleb in both Blood and its sequel Blood II: The Chosen; he has also been attributed as the voice of the robed cultists. He specializes in humorous voices and accents.

His other notable roles include starring in a variety of Humongous Entertainment children's games, such as the Pajama Sam and Freddi Fish series (somewhat ironic given the character of Caleb). During the late 1990s he was very much involved with Monolith Productions, voicing the previously mentioned roles in the Blood series and also voicing in Claw and Get Medieval (as well as the Monolith published Gorky 17, otherwise known as Odium). He has also voiced in a variety of other games, a good deal of which were published by Sierra Online. Another well known role of his was Greil/Narrator in Fire Emblem: Path of Radiance.

He attended Boston University and the London Academy of Music and Dramatic Art.

He was previously listed as being a "Male Voice Talent" for Radio Joe's Amazing Sound Productions, Inc based in Louisville, Kentucky.

He now runs a personal website entitled "Stephan Weyte - The Magical Wonderful Prince of Stories", which prominently name-checks his role as Caleb.

"I’m Stephan Weyte.Voice actor. Sometimes misspelled as Stefan or even Stephen. I’m an actor trained in drama at Boston University and the London Academy of Music and Dramatic Art. I’ve performed in theatre on Broadway, Off Broadway, and in regional theaters all over the country. Now, I make my home in the picturesque northwest. Seattle, to be exact. You’ve probably heard my voice in a few places. In commercials, such as spots voiced for Boeing, Lexmark, Petsmart, US West and Microsoft. And in games, such as The Matrix, Pajama Sam, Claw, Freddi Fish, Total Annihilation, Haunted Childhood, Starsiege, Police Quest, and Fire Emblem. One of my more notorious characters is the sarcastic, singing 'Caleb' in Blood 1 and 2. I’ve also done quite a few independent films. I’ve garnered somewhat of a reputation as a storyteller. Whether for peppy little cartoon characters, diabolical gaming villains, or smooth and enticing announcers, my voice can tell your story."--Stephan Weyte - The Magical Wonderful Prince of Stories

He provides the voice of the protagonist in the 2014 German independent film FPS - First Person Shooter in homage to his most iconic role. The character itself is only visualized in the first-person. Similarly, he has been hired to voice in the crowd-funded online motion comic series ANTI-HERO starting in 2018. He also voices final antagonist Nyarlathotep in the retro-styled first-person shooter DUSK, which received its finished release in 2018 and was directly inspired by various titles including the original Blood.

When it comes to the prospects for a Blood III, or even voicing Caleb in an unofficial capacity, he has had this to say:

"I've been asked many times from folks all over the globe about a Blood III. I tell them, 'talent' is on the lowest rung of corporate importance. Bug them at http://www.lith.com I have 'nuttin ta do wid it,' unfortunately, and if there ever is a Blood III, since now the head honchos are in L.A. I think; *I wouldn't put it past them to hire another voice for the part. They don't care. And yes, my ass would be sued and put in a sling if I did any Caleb off the reservation. Pretty stupid as the games were put out over ten years ago and if they're not going to do another, what's the big deal?"--Stephan Weyte 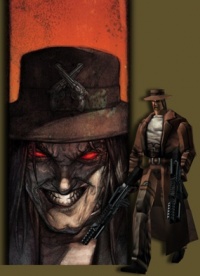 Stephan Weyte has voiced for these video games: