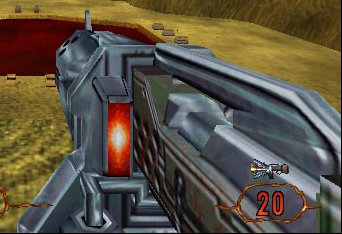 "A highly experimental weapon currently under development by Cabalco Industries, the Singularity Generator is designed to create a small, localized singularity, or black hole. This black hole will suck in and destroy almost anything in its vicinity. This incredibly powerful weapon remains in the prototyping stages due to problems with maintaining the fabric of reality when it is used, but as they say, you must break a few eggs to make an omelette."--Blood II: The Chosen Manual

The Singularity Generator is an energy weapon found in Blood II: The Chosen and is considered the BFG of the game. It projects a purple laser beam, and when that laser makes contact with a solid object, such as a wall or person, a purple vortex opens up, pulling objects in the vicinity into itself and causing massive damage. Like most BFGs, it uses large quantities of ammo and takes a long time to fire. Also, if a vortex is already open, the weapon cannot be fired again until that vortex closes. Enemies like the Behemoth or Death Shroud don't appear affected by its pull, but small enemies like Cultists or Shikari do.

Caleb first encounters the Singularity Generator when it is used on him in the Lafayette Museum of Antiquties by Gideon, the Mad Scientist, and the Prophet guardian. It appears to be an attempt to kill Caleb, but only succeeds in bringing Gabriella through. A subsequent attempt also brings Ishmael through. Caleb picks up the Singularity Generator for his own use in the CabalCo building, and is the last new weapon of the game.

The gun serves as a major plot device, as interdimensional technology is in part responsible for the invasion of Reality Beta and that is involved in the resurrection of the Chosen. Some unused sound files from Blood II: The Chosen REZ file mention a "Channeling Knife" that was severed in two and left somewhere called "Old Town". Gideon mentions that its power is to open up the doors to the realities, so it would probably have been related to the Singularity Generator.