From Blood Wiki
(Redirected from Samibutt)
Jump to navigationJump to search 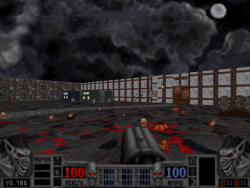 "I don't know what you trying to do here but uploading 4 very simple maps in a row today, some of which didn't even work, and without any screenshots shows very little effort and makes you and your maps look like a joke really (your name was already suggesting this btw). So stop uploading one after the other mediocre map (understatement) but invest some time in proper mapping... The problem is that beginners tend to find their creations to be extremely cool, I can know because I was a beginner once, but would I have dumped my very first handful of maps on a website like this one?, nope. I would have absolutely listened to other peoples advice and examined their releases and would do anything else to improve my mapping. You can not just be a technician when it comes to mapping, you also need to be an architect, interior designer, landscape designer, script writer etc and be able to crawl into the skin of the person who potentially is going to play it. It's very unlikely to build something in just one week that meets all these requirements, even for a so called 'pro'."--BME

Season of Death (styled as SEASON OF DEATH) is a ten level fan add-on for the original Blood by SAMIBUTT (aka Machine X) released on October 4, 2013. Like most of his output, it was poorly received by the wider community; somewhat similar to the status of the "Terry" WADs in the Doom community, in terms of how rapidly they were uploaded without much apparent thought or effort. The episode is uploaded just as "samibutt" and its file name is END.INI, though the archive is SOD.ZIP. It requires the Plasma Pak to play, and bizarrely uses the Cryptic Passage naming conventions for levels.

"THIS IS THE FIRST MAP WHICH I MADE.IT TOOK ME 10 HOURS TO MAKE THIS MAP.IT IS A VERY UNIQUE MAP OF A RIVER WHICH STARTS FROM THE BEGINNING OF THE LEVEL AND ENDS AT THE END OF THE LEVEL INCLUDING VARIOUS MONSTERS,GUNS,KEYS AND MORE STUFF ETC.THIS IS THE LINK OF THE MAP.ENJOY."--samibutt

<< Caleb Will Have His Revenge On Toronto | Out for Blood >>
Retrieved from "https://www.blood-wiki.org/index.php?title=Season_of_Death&oldid=46082#By_the_Same_Author"
Categories: