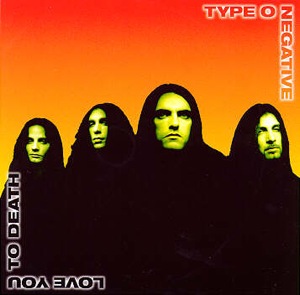 "The inclusion of this chilling Type O Negative music video to an already red-hot product like Blood is a powerful combination... their unique gothadellic sound meshes with Blood horrific atmosphere and edgy game play, making for a thoroughly innovative experience."--Richard Burns, senior vice president of sales and marketing for GT Interactive

Type O Negative was a goth-metal band from New York. In the Blood community, they are known for the song "Love You to Death", which was a bonus music video included on the Blood data CD and the background track on the Blood trailer. The song appeared on their 1996 album, October Rust. They are no stranger to appearing on video games, as their music has appeared on the Mortal Kombat movie soundtrack and the compilation Duke Nukem: Music to Score By. After the death of frontman Peter Steele, the group split up in 2010.

Love You to Death Lyrics[edit]

In her place one hundred candles burning

As salty sweat drips from her breast

Her hips move and I can feel

What they're saying, swaying

I am your servant, may I light your cigarette?

I can feel what you're saying, praying

I beg to serve, your wish is my law

Now close those eyes and let me love you to death

Shall I prove I mean

I say the beast inside of me

Am I good enough for you?