The Life Leech (also known as the HellStaff, Soul Staff, or Skull Staff) is a magic weapon found in Blood and Blood II: The Chosen. It is a staff with a skull tied to the end that fires an ongoing stream of yellow fire and energy, causing explosions and spirit damage to the target.

"This artifact draws its power from the life energy of your foes. Run low on ammo and it saps your own strength!"--Blood Manual

The Life Leech occupies slot 9 and uses Trapped Souls (blue orbs with screaming faces) as energy. In versions up to 1.10, if the Life Leech hits a living target, it will add life to the player's, like a vampire. This was removed in version 1.10. However, if the ammo runs out, the Life Leech will drain the player's own health for ammunition. Despite that, it's a useful and damaging weapon, especially using its alt-fire as a secondary attacker. Victims who die from the Life Leech melt into a puddle of flesh.

Tip: note that while out of ammo, Life Leech drains Caleb's HP by dealing Spirit damage. Thus, you'll be able to power the staff with your own blood longer if you have a decent amount of Spirit Armor, which diminishes the damage the staff does to you as "compensation", but doesn't reduce its combat effectiveness.

AMMO TYPE: Trapped Souls
REGULAR FIRE: Fires a stream of damaging magic energy
ALTERNATE FIRE: Sets the Life Leech upright, letting it act as a sentry gun, but leaving the weapon at place. It can be picked again up by pressing Use key when close to it or moved by shooting with Sawed-off or Tommy Gun. Secondary fire requires at least some ammo to be loaded in life leech.

The primary fire for the weapon was a partial duplication of the Stone Gargoyle's attack.

"The Hellstaff has two attacks powered internally by ectoplasmic energies or externally by the player's own health. The primary attack rapidly fires ectoplasm blasts that drain health and can paralyze multiple targets within a small area of effect. This is similar to the Stone Gargoyle's attack and, coincidentally, Duke's freeze ray. The Hellstaff's secondary attack is close range. It can be used on anything, paralyzed or not, and sucks the soul out of whatever it hits. This attack also recharges the Hellstaff if it kills the intended victim. As the Hellstaff is fired, it is drained of ectoplasm. Once the weapon's energy reaches zero, the player's health is used to power the Hellstaff."--Nick Newhard 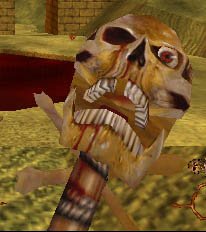 "The Life Leech projects wide bursts of life-stealing Eldritch Fire that can sear the flesh of your enemies from great distance. Striking the staff on the ground activates this weapon's alt fire, radiating a mystical shockwave that violently hurls opponents back. The Life Leech is the ultimate in arcane 'crowd control' but using it near high ledges or acid pools may prove unsafe (wink-wink) for your enemies. The Life Leech is fueld by user focus, so characters with an aptitude for the dark arts will find that it serves them well."--Blood II: The Chosen Manual

The Life Leech returns, but instead of using Trapped Souls as ammo, it uses Focus, which is rechargeable. If the ammo runs out, the Life Leech will stop firing, without draining the player's health. Despite that it's a useful and damaging weapon.

The appearance of Life Leech is strikingly similar to a so-called "Skull Lantern" used by Vasilisa the Beautiful, the heroine of the eponymous Russian folk fairy tale. In the story, it is a magical torch/staff topped with a human skull holding enchanted coal, which at certain point is revealed to possess power of burning people to ashes. While this similarity with Blood can largely be regarded as coincidental, it is also notable that along with Tchernobog, this could possibly be another (albeit unintended) nod to the Slavic mythology and culture. Interestingly, the text also features a magical doll. Skull Lantern's portrayal can be seen, for example, in illustrations made by Ivan Bilibin for this fairy tale.