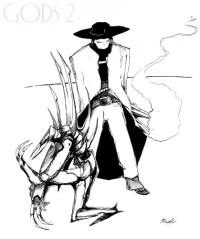 "So, what you will soon see (upon down-loading) is in some ways cheap yet strangely well produced. This is a little odd considering neither of us have any formal training, or experience in TC related projects. I am a 'writer' (if you could call it that), and also an artist. Mind you, as far as pixel art goes I may as well be using boxing gloves and crayons 'cause I can't form anything close to good. The main title picture is mine, thanks to the minor miracle of scanners and is of Caleb's newest enemy - Mokuma. Head Hunter is an aspiring programmer, yet with projects like this he may never get past the preliminaries :) He is very smart (maybe too much at times) and is responsible for most of the amazing feats done in these levels. Whatever takes time, and is irritating to do, he loves doing. Like Mr Spinks here..."
--Joel "Reactor" Blackwell

Joel and Kurt Blackwell (aka Reactor and Headhunter) are two brothers best known for creating the Gods, the Epic Trilogy (1998) add-on for Blood, as well as the attempted Gods 2 project for Blood II: The Chosen. They also worked on BloodLines (2001) together as part of the larger team known as Necrosoft. Work by Joel also made it into The Carnage Continues (2006) add-on, and he was the author of Caleb and the Beanstalk (a pastiche of the fable Jack and the Beanstalk), which was the runner up in the April 1999 "The Crypt Fan Fiction Contest", as well as artist of Caleb and Co and Versus (missing!). Joel was the subject of the March 7, 1999 edition of Bloodite of the Week, as well as being interviewed with his brother pertaining to Gods 2; Kurt was interviewed on May 12, 1999. Joel also himself interviewed Jerk about his MAIM add-on for Blood II. Joel was born on August 24, 1978 while Kurt was born on December 2, 1980; both lived in Perth, Western Australia in 1999.

"Unless you're a big Blood fan you might not have heard of it, but I worked on an addon called 'Gods', which quite a few people seemed to enjoy. It was designed to be the hardest bunch of levels ever created. We were going to make Gods 2 for Blood 2, but the editor for B2 was a tad underdone. I still have some original voices for it by Stephan Weyte (the voice of Caleb) that Monolith did for us while recording the stuff for the Nightmare levels expansion. Good times... I still hang out on the Blood forum, and have been there since Blood 2 was announced. There's not much to see there now though... the spammers have finally found it. I also did some work on Planetblood.com... so hearing about Blood now is like a sweet trip down memory lane :) Ah, the wonders of Blood's multiplayer..."
--Joel "Reactor" Blackwell