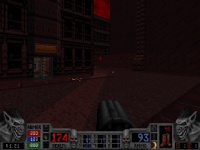 "We return to a strange and even more dangerous RIP Building (the notorious Centre For Funereal Excellence and the headquarters of Rest In Pieces Incorporated). RIP Inc are big players in the funeral business. They also have a neat sideline in stolen body parts which they'd rather no-one knew about. It's another weekend, and again somebody forgot to lock the place up. What a fine venue for some kick-ass fun with your friends..."--Official description

This mod by Jeff "Zipp" Morris is set in a map called the RIP Arena, of which parts one and two are self-contained subsets of part three which is the main environment. It is advised by the author that players should explore before playing against others.