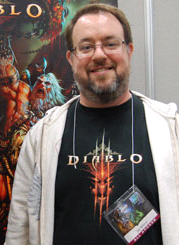 "Jay Wilson, project leader and Blood [2]'s lead game designer, is one of the rags to riches success stories in the 3D game design community. Not too many years ago, he was the humble assistant manager [and usher] of a movie theater and an aspiring, though unpublished, novelist. Like many of his contemporaries, he downloaded a level editor for an unassuming 3D action game created by id Software, and discovered he had a talent for knocking out alternate realities. Scott Miller, president of 3D Realms, thought so too, and in a momentous Sunday night e-mail offered Wilson employment in level design. It was an abrupt right turn in life, and nine days later, he was using the Build editor to fashion a dark vision of hell. If you found yourself on your knees, grasping a bloodied paunch and breathing your last breath in "Cradle to the Grave," then you were in the clutches of Wilson. His work on Blood was so successful, he was offered the project leader position for the sequel when Nick Newhard, Senior Game Designer and programmer for Monolith, passed [on the project]. Selling movie tickets one day, chief butcher the next. Either the gaming industry is incredibly cool, or Wilson has made a pact with Satan."--"Building a Bloodier Tomorrow: An Interview with Blood 2 Lead Designer Jay Wilson", David Laprad, Adrenaline Vault, May 17, 1998

James Wilson III was the lead designer of Blood II: The Chosen and the main level designer and a cut scene writer for Blood and its Plasma Pak expansion; hired onto the project in August 1995 by Apogee Software founder Scott Miller after seeing his Doom maps. He was also involved in the game and level design for The Nightmare Levels expansion pack for Blood II. He is known by the name "Jay" or his nickname "Shade", and is often referred to in Blood and Blood II development updates. He played Gideon in the fan made Bloody Interviews: The Bad Man and a satirical portrayal of James Wilson appears in the fan fiction Blood Runner.

He left Monolith Productions after the The Nightmare Levels development in April 1999 to join the ill-fated Cavedog Entertainment. His last work at Monolith was on the pre-production for Sanity: Aiken's Artifact, and he had already voiced his intention to pass on any future instalment in the Blood series. His work on the eventually cancelled Amen: The Awakening at Cavedog was followed up by a short stint at Electronic Arts in 2000 working on The World Is Not Enough. He later jumped to Relic Entertainment on the real time strategy game Warhammer 40,000: Dawn of War among others, such as Company of Heroes and Impossible Creatures, which attracted the attention of Blizzard Entertainment.

Starting on the Starcarft II team, he was then appointed as the lead designer on Diablo III for Blizzard, a position that attracted considerable controversy. Most notably, he directed a personal insult towards original Diablo designer David Brevik after he voiced criticisms of design decisions in Diablo III. Although Wilson subsequently apologized, it strained ties with the fan community already worn by the changes in direction from the game's beloved predecessor, anticipated features that were cut, and the much maligned Auction House microtransaction system and the game's always-on DRM. He left the Diablo team in January 2013, replaced by fellow ex-Relic staffer Josh Mosqueira. He instead contributed to other projects, such as being the designer of World of Warcraft: Legion.

He left the company and the games industry in June 2016 to return to his original passion for writing. This also coincided with him moving back to the Pacific Northwest, where he originally moved to when hired by Q Studios. In the Blood II credits he is described as the "The keeper of the Cabal", "Cabalco Public Relations Dweeb" and as one of the "Sadists In Training."

"Yes, I have left Monolith. I'm going to Cavedog to work on Amen as an Act Designer. To clear things up, though, I'm leaving on good terms and with no negative feelings towards Monolith. I think they're a great company, and the new stuff they have in the pipes is looking awesome. But the Amen project is like a dream come true for me in terms of what I want to work on. That coupled with the offer they made me was simply not something I could say no to. I'll miss Monolith, but I'm really looking forward to joining the Cavedog team! I'll be in touch, as always, and keep your eyes out for Amen, I think it's going to surprise a lot of people. :)"--April 1999

"Jay completely raised the bar on Blood's level design. Bringing Jay onto the team was a tremendous win for us, and the quality of his work was top notch. The overall gameplay and fun factor of Blood owes a great deal to Jay's skill."--Peter Freese

"Jay Wilson, a.k.a. Shade, is our resident level designer. You might regognize some of his levels for Doom II, such as the ass-kicking Return to Purgatory. When you find yourself cursing Blood's wickedness, this is the guy to blame. Shade is a self-avowed action and strategy gaming addict and recently retired as the reigning champion at the top of the Doom Deathmatch Competition ladder on CompuServe. Some of Shade's other Doom II levels include Fearless, The Keep, Theatre and Theatre2"--Q Studios website

His Monolith office circa 1998