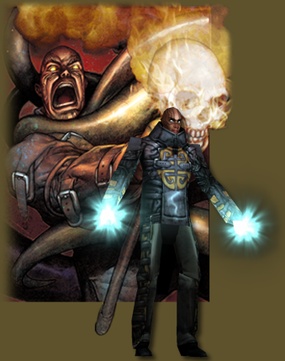 "A man of few words and violent, decisive action, Ishmael's keen mind and emotionless personality make him a dangerous man to cross. His command of the dark arts is greater than any of the other Chosen, and he uses that power and knowledge to decimate anyone who opposes him. His enemies die suddenly, and horrifically, usually having little or no chance to fight back. Those that do find that Ishmael has the distinct ability to counter almost any attack. If he has a weakness it is on his dependence on his magic, which has caused many of his other skills to atrophy."
--Blood II: The Chosen Website

Ishmael is one of the four Chosen. He is recognized as the most intelligent of the four and specializes in the dark arts, eschewing conventional weapons. He and Ophelia are the only ones with the magic capacity to use The Orb's alt-fire without the use of third-party mods. He was voiced by Michael Shapiro.

Little is known of Ishmael's early life, except that he at one time played "Jo-Jo, the Idiot Circus Boy". He mentions at one point that he had engaged in cult work beforehand, though for which cult was left unsaid. We do know that it was after he lost such employment that he was forced into joining the circus. He originally took pride in his job, until the abuse and general humiliation of being a circus freak slowly turned him into an emotional wreck, a prisoner to his own low self-esteem.

During this time he received a message from Tchernobog through a picture in his dressing room, commanding him to kill the circus staff and come to His side, telling him that there was "much work to do". Ishmael escaped the circus, killing many of its workers and other inhabitants. Through devoted service he soon rose to become one of the Chosen, the elite generals of the dark god Tchernobog and His evil cult the Cabal. 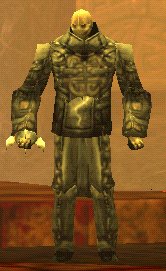 Sometime between 1871 and 1928, Tchernobog summoned the four Chosen to the Hall of Epiphany, His main chamber. Instead of giving them orders as the Chosen had expected, Tchernobog told them that they had failed Him, and proceeded to disavow them. The four were stunned as Tchernobog sent in His lieutenants to take the Chosen out one by one. Ishmael was set on fire and then eaten by Cerberus. After his resurrection, Caleb would later avenge his friend's death by slaying Cerberus, subsequently blowing his carcass into pieces through the use of carefully placed Remote Detonators.

Resurrection and the Ancient One Invasion[edit]

More than a hundred years after his death, in 2028 Ishmael is resurrected through a faulty attempt to kill Caleb using the Singularity Generator by Gideon and his companions. Ishmael seems to be the only one that understands what is truly going on, being the only one properly knowledgeable of the responsibilities of The One that Binds and of the growing rifts between the worlds.

He tells Caleb that another reality is forcing its way into our own, and informs him that he is the only one that can stop it, since he inherited the dimensional binding power after he killed Tchernobog. Ishmael appears numerous times throughout Caleb's quest to kill Gideon, relentlessly warning him that it is his responsibility to seal the rifts. He also tells Caleb that an also resurrected Ophelia is being held at Gideon's Temple. He and the other Chosen eventually reunite on the other side of the rift following Caleb's defeat of the the Ancient One, with him eventually convincing Caleb to do the right thing and rebind the fabric of reality.

During their journey back home, the four Chosen stop at a campfire and tell scary stories. Ishmael tells of the time he escaped from the circus, as well as revealing that he also likes weenies and marshmallows.