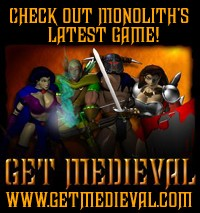 "Get mad, get even, Get Medieval! Immerse yourself in a frenetic action environment as you battle the evil minions of a dastardly dragon. Laugh out loud at the quips, quibbles, and quirks of this slightly off band of adventurers. And while you may not want these characters to show up at your next dinner party, you'll forgive their eccentricities when their diverse but effective skills get you through to the next level."--Monolith Productions

Get Medieval (developed under the title Dungeon Warriors) is a top-down action game, and the third ever release by Monolith Productions, first published on August 22, 1998. It is heavily influenced by the classic Gauntlet, but like most early Monolith games injects its own sense of humour. The game uses the Windows Animation Package 32 engine written by Brian Goble and used earlier in Claw and later used in Gruntz. This version uses REZ files to store its multimedia assets the way LithTech does. The game consists of 40 levels in the Dragon Quest campaign with 8 different dungeon types, as well as a random dungeon generator and the ability to play custom maps made using the GMedit (aka WapWorld) editor; though limited to five enemies per dungeon type. Both hot-seat and network multiplayer are supported.

Its most obvious ties to the Blood series, aside from being released between the original Blood and Blood II: The Chosen, is that it shares Jason Hall narrating as The Voice; he does this in both multiplayer and single-player however. Stephan Weyte also voices the Barbarian character Zared (ala Arnold Schwarzenegger in Conan the Barbarian), while Michael Shapiro voices the Archer elf Eryc. Sorceress Levina is voiced by Blood II cast member Krisha Fairchild, while the Avenger Kellina is voiced by Annette Toutangi, her only known role. The plot involves Kellina and company seeking to avenge her murdered family at the hands of the Great Dragon Dirindale by raiding its dungeon home.

The game features character statistics similar to Blood II, with Zared being the strongest, slowest character ala Gabriella, and Eryc being the weakest, fastest character ala Ophelia. Levina is similar to Ishmael, leaving Kellina as most like Caleb. The game also has a number of enemies in common with the original Blood such as bats, rats, spiders and a spider queen. Similar to the one-liner contest held for Blood II, Monolith ran a contest allowing fans to submit creature names for the game. As with Claw and the later Gruntz, the game sadly remains unavailable from digital distribution services such as GOG.com or Steam.