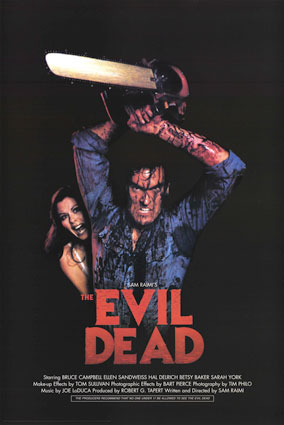 The Evil Dead is a low budget horror movie franchise that had tremendous influence on the atmosphere and elements of Blood as well as many other first-person shooters. The first Evil Dead movie was created in 1981 and became a cult classic that spawned two sequels and a satirical musical.

The movie is known for its over-the-top blood, gore and violence, to the point of ridiculousness. Subsequent movies downplayed the horror element and added more dark humor and cartoonishness, an influence well-seen in Blood.

All three movies were written and directed by Sam Raimi (The Hudsucker Proxy, Spider-Man) and starred Bruce Campbell, a notable B-movie actor known for having small but dynamic bit parts.

The relationship between these movies and the first-person shooters of the 1990s is further highlighted by the independent film FPS - First Person Shooter.

The first two Evil Dead movies take place in an isolated cabin in the woods. Five college students discover an audio tape of a scientist (the cabin's previous tenant) reading the words of the Necronomican, a book he was studying. The words release a nameless, non-corporeal "evil" in the woods that infects each of the teens until only one is left.

The second movie begins much the same way, although it introduces more characters, and contains more cartoonish horror elements (such as a laughing lamp and squeaking disembodied hand). It ends in a cliff-hanger as Ash tries to open a time portal to cast out the evil, and ends up being sucked in himself.

The third movie takes place in medieval times. Ash is captured by King Arthur, but subsequently released when he proves his battle-worthiness against the deadites. Ash journeys to a graveyard to retrieve the Necronomicon (of the past), but ends up releasing an army of the undead, led by Ash's evil twin. The movie culminates in a giant battle, whereupon Ash is sent back to his own time.

Spirit Armour and the Necronomicon from The Evil Dead