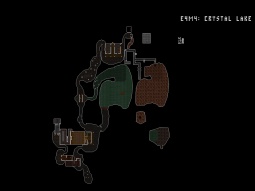 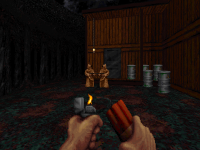 "Walk forward, and enter the barn to your left. After entering the barn, go to the left, and pull the lever to ride the lift up to the 2nd floor. Head toward the right, jump down, and follow the path over to your right. Go through the metal door, up the steps, and through another metal door into the dining room. On the far side of the dining room, you'll find another passage leading to a room with a fireplace. Go through the passage across from the fireplace, and out the door to your right. Turn to your right, and follow the path around the house, into the woods, across a bridge, and you'll eventually find another building. Jump up on the porch, and enter the door on your left. Grab the Moon key, and go back outside. Continue along the path to your left, and you'll get to the outhouse requiring the Moon key. Open it up and jump in. Sink all the way to the bottom, and follow the underwater passage. Follow it to the concrete underwater water passage, and follow it to your left. After turning the corner, take the second passage on your left. Swim to the end of it, turn the switch, swim through and surface at end. Jump up on to solid ground, and you'll see the exit symbol in front of you. Don't hit it. Instead, turn to your right, and shoot the wall a little bit to the left of the water. It's not marked, so look around. After blowing the hole in the wall, enter it, and push the symbol to go to the secret level. "--Baytor's Guide