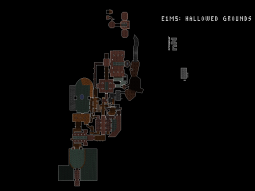 Hallowed Grounds (E1M5) is the fifth level of the first episode in Blood. The level resembles a castle or cathedral with underground passages. 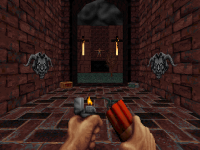 "Walk across the open aired area into the next building. Over to your left, is the entrance into a big hallway with lots of pillars. Enter it, and turn to your right. Walk all the way down until you get to the wide wooden door on your left. Open it, and keep walking, past the Moon and Skull key doors, until you finally get to the Skull key. Don't go back to the Skull key door yet. Instead, take the door to your right into a large room. Up on the right ledge, you'll see a doorway, follow it along to a small pool of water on your right. Jump in, swim to the end, and push the switch. Swim back, and a staircase will be opened to your right. Climb up stairs, listen to the message, and open the curtains on the left fork. Jump down, and walk through the doors to your left. This will take you to the Skull key door. Open it, and follow the stairs up until you come to a room with several doorways. Take the one to your immediate left, and drop down the hole in the floor. At the end of the passage, you'll see a differently coloured wall, push it, and enter into the next room (you could take the long way around through the courtyard, but this is the quickest way). Keep walking forward and take the Moon key over the left side of the room. When you pick up the key, the gate in front of you will open up taking you back to the big hallway from the beginning of the level. Follow it back around to the Moon key door. Open the door, and follow the stairs down. At the bottom of the stairs, take note of the Spider key doors in the room on your right, but take the passage over to your left, until you come to a lift. Take the lift up to the wine storage area, and pick up the Spider key. Return via the lift to the Spider key doors, and open the left one. Follow the passage, turn to your left, cross the bridge, and push the symbol to end the level."--Baytor's Guide