From Blood Wiki
(Redirected from Dynamite)
Jump to navigationJump to search 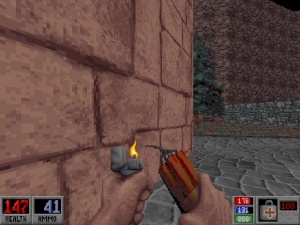 "Light one up and chuck it at a group of zombies and you'll be rewarded with red rain and chunks of rotted flesh on the brim of your hat. The longer you hold down the fire button, the farther you'll throw the bundle. Watch the meter on the status bar to gauge the distance. The primary mode explodes on impact, while the alternative mode will burn all the way down before it explodes, making for some interesting traps. "--Blood Manual

The Dynamite Bundle is a weapon in Blood that functions much like a grenade launcher in other first person shooter games. One twist is that the player can control the throwing distance, and the weapon explodes on impact. The secondary fire turns it into a time bomb, which makes it great for traps and allows it to be bounced around corners (no longer explodes on impact).If held on to for too long, it will explode in the player's hands, doing significant damage to the player.

AMMO TYPE: Dynamite Bundles
REGULAR FIRE: Throws a dynamite bundle which explodes on impact
ALTERNATE FIRE: Ignites the dynamite; Pressing regular fire will throw dynamite that does not explode on impact, and thus can be bounced off of obstacles. Pressing alternative fire again sets a burning dynamite bundle at the player's feet, which burns down and explodes