The Doom engine is an three dimensional first-person game engine developed by former id Software lead programmer John Carmack for use in the original Doom, which was first released on December 10, 1993. The title was revolutionary for the then nascent first-person shooter genre, earlier defined by id's own Wolfenstein 3D (1992), massively popularizing it to the gaming and wider public. Later shooters for years, including Blood, were often simply referred to as Doom clones.

The Doom engine was subsequently used in the sequels Doom II: Hell on Earth (1994) and Doom 64 (1997), as well as third-party games Heretic (1994), Hexen: Beyond Heretic (1995), Strife: Quest for the Sigil (1996), Chex Quest (1996) and Hacx: Twitch 'n Kill (1997). It was also explicitly designed to be easily modifiable thanks to its PWAD system, encouraging custom levels, various mods and full on total conversions. Many of the level designers hired to work on Blood were from the Doom level making community, such as James Wilson III, John Anderson and Terry Hamel.

The Doom engine was then later used in the fan made Blood game entitled Blood TC first released in 2006, as a total conversion for Doom II. A Blood Resource Pack was also earlier compiled as a texture WAD file allowing for the Doom engine to use Blood textures. It was created by Daniel "Tormentor667" Gimmer, who used it in his popular "The City of the Damned" map. Later maps such as "Infuscomus" and "Miskatonic Trip" carried over from this.

ZDoom is a modified version of the Doom engine made to include Build and Quake engine like effects. The Blood TC project switched to ZDoom and started the ZBlood effort because ZDoom is a lot closer to the Build engine used in Blood. ZBlood can be used by all ZDoom compatible Doom source ports, most notably the modern GZDoom. The undertaking has also spawned numerous forks over the years, most notably and recently ZBloody Hell. ZDoom itself is also able to be ran with the Blood executable, which puts the BloodBath announcer known as The Voice into Doom. ZDoom can also limitedly run Blood maps and art files using the same method, but a lot of the Build specific effects do not work.

EDGE, another engine based on the Doom engine, is being used to create the fan made HYPERTENSION.

Because of its large community and easy modding support, the engine and its modern derivatives have become popular for Blood projects that require modifications to the base gameplay or the expansive addition of new assets not properly possible with the original Blood executable. Examples include Caleb Versus Nazis, Blood: Dead on Arrival, and other projects listed below such as Ultra Crispy. This fills in a gap that was acknowledged by the Blood developers as one of the greatest drawbacks of their game. 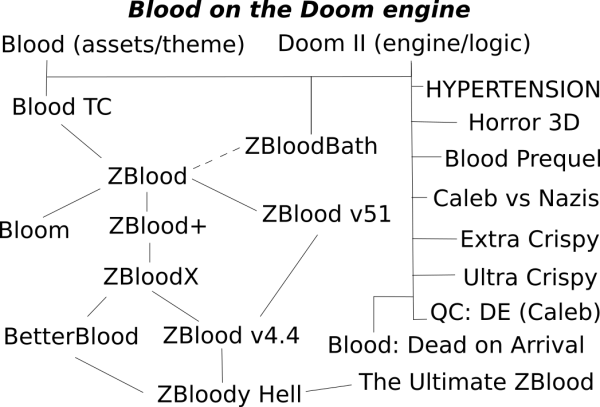