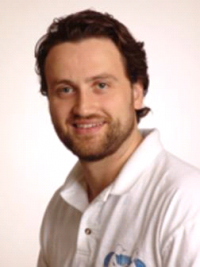 "Prior to starting UpTap, Daniel Bernstein founded Sandlot Games in 2002 and served as its CEO until he sold it to Digital Chocolate in 2011. Sandlot Games was a premier publisher and developer of entertaining casual games across a variety of platforms. Daniel is a veteran of the gaming industry and has over sixteen years of executive management, game, publishing and business development experience having successfully launched hundreds of games with Sandlot, Kesmai Studios, Monolith Productions and WildTangent. Prior to starting Sandlot Games, Daniel held the position of director of product strategy at WildTangent, where he devised and executed its downloadable try before you buy games business. An accomplished composer, Daniel also wrote music for most of the games developed and published by Sandlot Games. Daniel holds a BS in Computer Science and an MA in Music Composition from the University of Virginia."--UpTap profile

Daniel Bernstein (born in Saint Petersburg, Russia) was a Monolith Productions musician and manager who, alongside Guy Whitmore and Mike Cody, wrote and composed the soundtracks, among other audio work, for Blood and Blood II: The Chosen. He also worked on Shogo: Mobile Armour Division and many other games created and published by Monolith. Alongside Whitmore, he helped develop the concept of adaptive in game music which premièred in games like Blood II and Shogo. Besides his themes, he is perhaps best remembered in the Blood community for the creation of the Cultist Language which is now a staple of the series. The language is commonly said by Cabal in both games and appears in the studio versions of the Blood soundtrack.

In 2002 he founded Sandlot Games and served as its President and CEO. The group had become one of the premier publishers and developers of the emergent casual gaming scene. Prior to founding Sandlot, Bernstein was the Director of Product Strategy at WildTangent (founded by Alex St. John, whose patronage helped launch Monolith to begin with), where he helped develop and build an online fee-based game business. He is noted to have successfully launched twenty game titles with Kesmai Studios (1994 – 1996; audio director), Monolith Productions (1996 – 1999; director of product strategy) and WildTangent (2000 – 2002; director of product strategy). He continued his composing work by making the soundtracks for most of the games published by Sandlot. He holds a BS in Computer Science and an MA in Music Composition from the University of Virginia.

Daniel Bernstein and Vitali Vostrikov founded UpTap in 2012 upon selling Sandlot to Digital Chocolate in 2011. UpTap specialized in casual games for tablet computers, such as Galatic Skater. The company was based in Bothell, Washington as well as having a development office in St. Petersburg, Russia, as did Sandlot before. The company closed in December 2014, and Bernstein is now the vice president of Corum Group. He also worked in business development at vJungle in 1999, and as a consultant for RealNetworks and Robodub since December 2013. He has also composed for the short films Kansas (1998), Maid of Honor (1999), Your Own Best Enemy (2000), Grizo frouto (2000), as well as the feature The Penitent Man (2010).