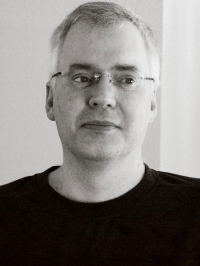 Craig Hubbard is a former employee of Monolith Productions. He had been with the studio since its early days, having been hired by Monolith in 1996. He was one of the last of the older employees to be with the company following the various departures of the likes of Nick Newhard, James Wilson III, Brian Goble and Jason Hall. He served as a level designer, cut scene writer, and a web developer for Blood and also designed levels for its Plasma Pak expansion. He continued his roles as level designer and writer for Blood II: The Chosen, though he is not credited for work on The Nightmare Levels.

He project lead and designed Shogo: Mobile Armour Division, a rocky experience that shaped his later design efforts in terms of scale and pre-planning. He was then lead designer for the No One Lives Forever games and most famously the F.E.A.R. series. Alongside Frank Rooke of Tron 2.0 and Condemned fame, he was one the main designers at Monolith. His last game for the company was Gotham City Impostors.

In 2013 he left Monolith to help found Blackpowder Games and work on their game Betrayer alongside five other former employees of Monolith (including Blood II and Shogo veterans Brad Pendleton and C. Wes Saulsberry III).