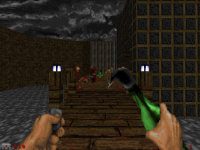 "The Cabal are back, a religious group, robed and armed to the teeth, infamous for their mass murders in towns and butchery, their evil spells and genetic experiments to raise the dead and create new monsters, their powerful tehnology and weaponry that have led them to be more than a force to be reckoned with. Caleb had set off to destroy the Cabal and Tchernobog for their betrayal during the era of the 1920s."--Official description

Caleb Versus Nazis (also called Caleb Vs. Nazis) is a ZDoom fan-made sequel to Blood by YouTubers 1Tristan2 and WiiStation360Games.

Caleb will fight against the paired-up Cabal, Nazis, undead and the forces of the Netherrealm as he seeks to absorb as many of his foes' powers to get to Tchernobog, who was banished into the Netherrealm and not completely destroyed, currently growing in strength. Hitler is preparing to fight Caleb, too, in his ultimate mecha-suit. The Cabal sent an army of Fanatics and a NEW enemy type, Confessors (wearing bright green robes and armed with green-projectile plasma guns) into Germany to find Caleb during the fall of the Nazi Regime. Eventually, they made a truce with the Nazis to find and kill Caleb, in exchange for firepower and support. However, they intend to betray them once Caleb is dead, so that Tchernobog may steal his powers and conquer the Earth.

The Special Edition is the latest version, offering 20+ levels, including DeathMatch-compatable levels, with various weaponry, Blood and Doom foes, as well as the opportunity to fight Hitler in an extremely powerful mecha-suit, code-name 'PALADIN'.