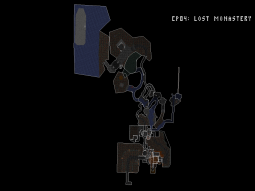 "This place was formerly home to the Holy Order of Carpathia, but in its present state, it would be difficult to associate the word 'holy' with it in any way! Here you will explore an old church, and may find some secret underground caves and streams, as well as climb the steps of a forbidding bell tower."--Cryptic Passage README.TXT

Lost Monastery (CP04) is the fourth level of Cryptic Passage, the first expansion pack for Blood, colloquially known as Episode 5. It resembles a decrepit monastery. This level was used for the Cryptic Passage Teaser. 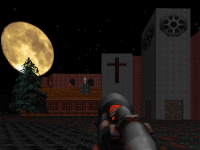 "Follow the path into the 'Holy Order of Carpathia', and go down the stairs. When you get to the Fire key door, turn right. There's some steps leading down to the Moon key door, and a path just to the right of the steps. Follow the path, go up the staircase, and follow the hall until you get outside. Once outside, you'll see a staircase over to your left (take note of this for later), and some steps leading down in front of you. Go down the steps, and enter the building through the passage to your left. Go down some steps, through a wooden door, and hit the switch you find in the room. Now go back to stairs I pointed out a moment ago, go up them, grab the Moon key, and jump down through the hole in the floor. You're now back in the room with the Moon key door, go through it, and you'll soon find yourself back outside in front of a small churcher. Enter the church, and go up the staircase on your left. When you get upstairs, jump through one of the windows, turn to your right, and follow the roof around the corner. You'll find window into another room, so jump in, and go down the stairs. Pick up the Fire key, and retrace your steps to the Fire key door. Go through the Fire key door, and enter the cave over to your left. Enter the cave, and after a long trek (across a few wooden bridges), you'll come back outside in an area outdoor area with a bell tower. On the other side of the bell tower is a well. Jump into it, sink all the way to the bottom, and follow the underwater passage to the next area. Surface, and jump up onto the ledge. You'll see a small stream going into the rockface. Jump in, and go with the flow. After you drop down a couple of waterfalls, you'll find yourself in the area where the Eye key is. Jump up, grab the Eye key, and jump back in the water and go with the flow again. Eventually, you'll go over a waterfall and find yourself in still water. From here you should see two paths. Take the one of the left (you'll have to jump up a little to get into it), and follow it back down to the bell tower. Go up the stairs of the bell tower, through the Eye key door, up some more stairs, and ring the bell. Now go back outside, and you'll find the stone archways. Go through the archway, around the corner, and hit the switch to end the level."--Baytor's Guide