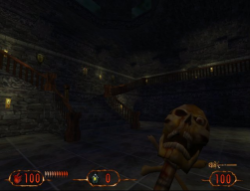 C5L4: Spooky Mansion is the fourth level of the The Nightmare Levels Expansion for Blood II: The Chosen. It is set in a large gothic mansion in the bayou, not unlike Disneyland's Haunted Mansion.

We return to the campfire, where the Chosen sans Caleb continue telling stories.  Ophelia looks to Gabriella.

OPHELIA: It's down to you. What's your story?
GABRIELLA: One time, I had to stay in a spooky mansion overnight.
OPHELIA: And?
GABRIELLA: And... that's it. It was scary.
OPHELIA: No deep secret to reveal? No thorny plot to expose?
GABRIELLA: No.
ISHMAEL: I must say I feel quite cheated.
GABRIELLA: Want me to tell this story or not?
OPHELIA: As far as I can tell, you've already told it.
GABRIELLA: It's much scarier if I go over the details.
ISHMAEL: You might as well. We still have half a bag of marshmallows to go through at any rate.
GABRIELLA: Good, now shut up, both of you. So there I am at this old drafty mansion, deep in the southern bayou near where I grew up. It's a cloudy night, and the air is filled with fog and swamp gas.
OPHELIA: Now you're cooking!

The level involves her search through a large dark house near the bayou where she grew up. She fights many ghouls before finding a bedroom in which to sleep. Before she can rest, Caleb appears and angrily curses at these trips through time. He wonders where he's going to go next, since he's "all out of Chosen to visit". Once again he is sucked through a vortex.