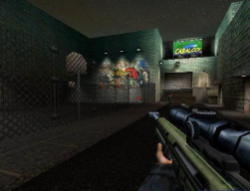 C3L1: Frank Cotton Memorial Bridge is the first level of the third chapter of Blood II (map name: 16_bridge).  It is Caleb's first obstacle on the way to Cabalco Headquarters. As he approaches, he finds the Cabal have raised the bridge, and he must sneak around the long way, including a detour into the underground, to lower the bridge and resume his journey.

Now entering New Town, home of Cabalco Industries' immense corporate Headquarters! Riots and civil uprisings are rarely a problem anymore! Overlooking the lovely burning river of White Rock, New Town is the near-perfect picture of a city only gently-oppressed by a giant, amoral megacorp! Sure, we admit that there are still the occasional ritual sacrifices, or kidnapping-by-dark, and yes, sometimes people disappear never to be seen or heard from again, but the streets are mostly safe and clean, and our economy is on the rise with only a few minor hiccups. We're New Town! Cabalco is our friend!

"Walk to the end of the road and enter the door on your right. Follow the corridor around until you find yourself next to the bridge. On the right side of the bridge, you'll see a door marked 'Keep Out'. Enter it and jump down. Go down the stairs and you'll find a room with some crates and a ladder. Use the crates to jump onto the ladder and climb up. Activate the panel under the 'Valve Access' sign, and climb back down the ladder. There should be a newly opened door in the floor. Jump down and walk around the corner and you'll see a couple of doors. Pushing the button will open the larger door revealing some supplies. Get them, then enter the other door. Climb the ladder, smash the grille at the top, and climb into the above room. Follow the corridor around (ignoring the door you'll pass) until you come to a room with black and yellow railings. Climb the stairs and activate the panel under the 'Valve Control' sign. Go back down the stairs, and across the little bridge. Take the passage to your left and climb the ladder up to the street. Follow the street all the way around past the playground. There's an Anger power-up here if you want to fight the Behemoth. Otherwise, rush up the steps, and into the front door of the warehouse. Find the door on the other side of the warehouse and go through it to get back outside. Go through the door marked 'Keep Out', up the steps, and climb the ladder. Grab the supplies, smash the grate, and jump down. Head away from the steam, and you'll find yourself next to the bridge again. Cross it to end the level."--Baytor's Guide