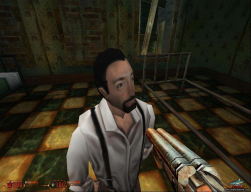 C1L4: Condemned Tenements is the fourth level in the game Blood II: The Chosen (map name: 04_steamtunnels). It resembles a dilapidated building that segues into some underground steam tunnels. In this level, Caleb starts to see random portals to Category:Reality Beta and emerging enemies like Shikari.