From Blood Wiki
(Redirected from Bloodlines)
Jump to navigationJump to search 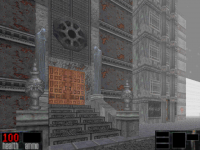 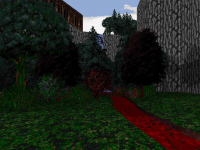 Not to be confused with the fan website Blood Line

"BloodLines was to be the most ambitious total conversion ever created for Blood. It still is, but it's far from what was intended. We have admitted that BloodLines will never be fully completed and have decided to release the TC "as is" with some retouching to make incomplete maps actually playable. I hope you'll enjoy playing it as much as we have enjoyed making it. Be aware though, that not all maps are what you would expect from a Blood level, it's not all bloody mayhem. Don't be disappointed if the TC doesn't fit your ideas about how a 3d-shooter should be, much of it is about atmosphere rather than action, you will benefit from approaching BloodLines with an open mind. This is the beta version of the first three episodes, including 13 maps, two new enemies and loads of new art and sound."--Necrosoft

BloodLines (also spelt Blood Lines or Bloodlines) is a classic fan add-on project that was hosted by PlanetBlood. The add-on features Caleb interacting with a failed writer named Maximilian "Max" Dunkel, who attempts to commit suicide after never actually writing his much anticipated upcoming book. Before he can do it however, he is approached by a man in the black suit representing "Prospero Publishing", who hands him an eerie typewriter to finish the book. Grateful, Max asks him what he can do to repay him, and the man in the black suite asks him to do "one small thing" for him.

It was one of the first major Blood add-ons to feature new multimedia assets, requiring the, at least temporary, overwriting of existing ones. This technique was later used in add-ons such as Bloody Pulp Fiction. The beta release featured thirteen levels spread over three episodes.

The development team behind the project operated under the name Necrosoft, and contained many otherwise well known mappers.

"However, I've made a promise to release the first three episodes, and enough promises about release dates have been broken through the years, so here it is, the beta-version of BloodLines. It's up to you wether you want to play it now, or wether you want to wait for the final release three weeks from now including the fourth episode, the cutscenes explaining the story, and possibly a map or two more in the 1st to 3rd episodes as well. Maybe some of you feel that playing an unfinished version will ruin the enjoyment of the final version, or maybe the additions in the final release will make you want to play the TC all over again. The choice is yours."--News release

Prior to this final release, a demo version was sent out on September 18, 1998 featuring "The Madhouse" by Alexandre Vancomerbeck (aka Hades). The beta release was announced on February 11, 2002.

A four level add-on that partially builds on from BloodLines by Matthew "Daedalus" Kallis, founder of The Postmortem and the Altar of Stone, as well as the later creator of Rage Against the Machine. Often stylized as "SIN Campaign", or "The SIN Campaign".

Out of the Grave Edition[edit]

"Welcome! This is the rebooted Bloodlines project started by Felix Drott and many other amazing creators in the Blood and mod community of the late 90s. I (daMann) was a mapper back then on the project, and in 2018 rebooted the project as a fun creative outlet and have tried to include Felix as well as current modding legends like Dzierzan in it when they can to help out! This version has some updates to old maps, quality of life improvements that make installing and playing easier with the new modern source ports, and a couple of surprises here and there. Enjoy, and look for more SOON (™) WHEN ITS FINISHED :)"--Description

First mentioned on January 20, 2018 and aiming to finish up the original version's unfinished assets, inspired by the release of BloodGDX and the playing of Blood fan add-ons on YouTube by people such as pagb666. Was given a full title and ModDB page on April 21, 2021 as well as a new beta of work done so far.

"In other news, the Bloodlines project I was a part of back then, we are now coming back to it and will be finishing up some of the unfinished maps, cutscenes, etc. and releasing it sooner than later :) All this BloodGDX stuff, finding all these cool TCs (what we called MODS back in the day), etc. coming out and being played... and finding youtube videos of kids and people who weren't even born yet or were youngin's when we made it, playing it... its pretty amazing stuff! I was just out searching for Reactor & Headhunter, letting them know we were coming back to this project and letting them know their amazing level was going to get posted out... finally... 17 years later!!"--Matt Mann (aka DaMann)

"...From all the Blood addons I have played so far I would definitely rank "Bloodlines" really high. There are some levels in this episode, especially in ep.2, that you have definitely never seen in any Blood game, maybe not even in any with the Build engine. Atmospherically it's top notch. "The Twilight Zone" was so weird and disturbing it gave me goosebumps at times, and "Nightmare at 15fps" puts you right into an old black/white movie from the 20s without any sound, just the noise of the movie projector all the time. Absolutely insane. And then there's a level (don't remember the name right now) where you see the reflection of the houses in a pool, you dive into the water - and you can actually enter those reflections you saw at the surface. Brilliant."--NightFright

<< Legends of the Iconoclast | The Sect War >>
Retrieved from "https://www.blood-wiki.org/index.php?title=BloodLines&oldid=49160"
Categories: