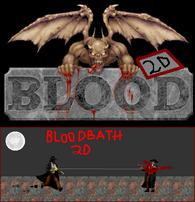 Blood 2D is a fan-made conversion of Blood from a first-person shooter into a side-scrolling video game, in a manner reminiscent of Doom 2D. The game allows the player to control Caleb from a side view as he fights various Cabal enemies and picks up weapons and items. A multiplayer oriented version called Bloodbath 2D was also released.

It was written by Caleb "big_geek"/"Bi9_G33K", actually sharing the name of the Blood title character, in Game Maker 7 (like the game Blood Reborn). Despite being largely unknown in the larger Blood community, it generally received decent reviews from the YoYo Games community. It was available for download on the YoYo Games website until spring 2011 when it disappeared.

The Blood Wiki would appreciate any mirrors or copies around, since we were never able to download it. Bloodbath 2D, however, had been re-posted to YoYoGames, from which our current copy derives. Various other people have also been said to have worked on similar projects throughout the years, and the remake of the The Flesh Game was also envisioned as a scrolling platform game.