Edit, edit edit, write, write, write, code, code, code, drink, drink, drink, eat, eat, eat, sleep, sleep, edit, write, code, what? A new year already? Didn’t we just make the 1st anniversary page? It is 2010 you say? Well, alright, let’s get on with this then... Let’s see, this year in the Blood Wiki. I can not in all honesty say that the wiki has grown as much as it did in 2008 but then the first year is always a busy time for any wiki. Thanks to the generous amount of help from people such as TheWallflower and our other contributors we have covered the basics, the complex, and just about everything. Though that is not to say that the Blood Wiki stayed static through out 2009. Our fan art galleries have expanded and grown to cover deviantART and a variety of other sources, including a little fan art site called My Sweet Passion which we only found through sheer luck during a Google search.

We have hunted down a variety of loose Blood cattle on the Internet and captured them and penned them up in our fine MediaWiki fencing (yes, I fed my cows today). That's right, locked up I say, Cheogh and Caleb and the other critters aren't pleased! This gathering includes our list of websites and other links, many supplied thanks to the all great and bountiful Wayback Machine (thanks to the Internet Archive, http://www.archive.org). Without it I would be so depressed about the fall of PlanetBlood and Geocities, but fortunately very little has been lost forever, including much of the old Pic of the Days. Also many thanks to all our fellow archivists out there. Horay!

Indeed, the Blood Wiki has matured more than it has grown, with only seventeen new articles in the past year but a much cleaner and expansive experience than ever before. Our images and categories are now properly organized, including our relatively new Wikia inspired root category. Our articles on those behind the Blood series, and those fans who continue it. We have also expanded our YouTube coverage and we are now even reaching out the pen to those who collect those stuffy old boxes from the late 1990s. It is now over ten years since the last official Blood release, that of The Nightmare Levels expansion (see User:Cheogh's fantastic banner from last August), but the community is far from gone. Let’s hope we can carry on Blood forever!: Gideon 03:01, 13 January 2010 (IST) (how dare you lie, it is the 12th. Damn you MediaWiki! :-P)

P.S. I have been busy on some other things during the past year as well. We have taken over the Wikia wikis for Red Dwarf (the recently resurrected to a fashion classic sci-fi comedy) and the cult musician Warren Zevon (whose resurrection would be quite Cabal-like to say the least, for more see here and here), plus more edits to Wikipedia, and sadly a few firefights, than you can shake a boom-stick at (largely about free, note the link, and GNU/Linux gaming). Piga Software, me and User:Tchernobog’s free software development group, have released Alexei: Part IX, Windys (watch for Blood allusions), and the Lamp Refugee technical demo (as well as updates for PigaVision and Piga's Pumpkin Carving).

So, in addition, we have been busy. The Blood Wiki has matured and we've put some work into other projects. This year’s image is not the Caleb article as it was last year, Caleb has pretty much stayed his dry sarcastic self, so instead we feature the wiki's article. I know you don’t have much other than memory to compare it to (other than this history :-D) but it will be a nice memory for the future! And as I have just found out, the future becomes the present faster than one expects! 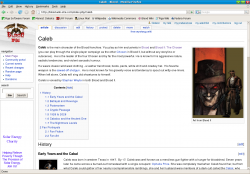 Below is a list of contributions by user, sorted from greatest to least. This is a rough number however, since it includes edits to talk and user pages as well as submissions to articles. Also, me and Gideon have used each others accounts on occasion depending on which computer we were using at the time. This also includes edits from 2008 and contributors who have not made an edit in the past year. 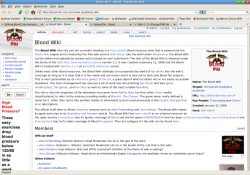 Thanks to everyone who has continued to support the Blood Wiki either through edits or word of mouth.

Go away to everyone who has tried to vandalized the Blood Wiki, our curse to send the undead on you is still in affect.

Thanks to LinuxGames, Free Gamer and Linux Gaming News for your links to us. It is nice to see our fellow GNU/Linux users care about Blood!

Thanks to Clari87 for your edits, but some more edits less directly related to HYPERTENSION would be appreciated. ;-) :-P

Thanks to Jessica Anne Laurna Blanchette for submitting her fan artwork to us.

There has been some fighting on the various Blood forums lately and we thank you all for not brining all that here.

Thanks to anyone who still talks about Blood, takes part in the community, or makes new work for all of us to enjoy!

A great big flaming rude word to our Internet connection, which prevented us from uploading our annual site screamshot until the 13th. Hiss!!!