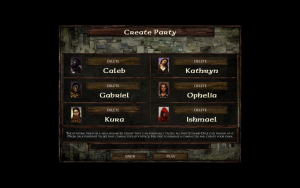 Character Generation. We are The Chosen.

Well, here we are, the 15th Anniversary of the Blood Wiki. Another milestone year. A shame then that it has been a quiet year for me outside of my usual schedule of moderation tasks and banal responsibilities. In fact, it has been a quiet year for me in terms of Blood in general. About the closest I came to playing anything Blood related in the past year was recreating The Chosen for use as my adventuring party in Pools of Radiance: Ruins of Myth Drannor, one of the many games I started on my Windows 98 computer after I finished going through Shogo, Blood II, and the Blood shareware using close to period hardware.

Now, seeing The Chosen as being analogous to a Dungeons & Dragons adventuring party is an idea that is not unique to me, as even the TV Tropes article on Blood talks about the "Fighter, Mage, Thief" trope at one point during its meanderings. I first adapted The Chosen when creating the adventuring party I would use to play through Icewind Dale: Enhanced Edition back in 2019, with Caleb and Gabriel both serving as as my front line Fighters, Ophelia being my Rogue, and Ishmael of course taking the role of my Mage. 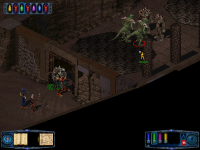 We are here for you whether you like it or not.

As Icewind Dale supports generating a six person party I also brought over Kathryn and Kura from Shogo, with the former eschewing her pacifist ways just a little to serve as my Cleric, and the latter helping to further flesh out the party's offensive capabilities as an Archer. This not being Baldur's Gate their conflicting alignments did not prove to be a problem, although it really does not pay to be an evil party in any of these games.

Ruins of Myth Drannor only allows for the creation of a four player party, meaning I needed to make some adjustments to my core team. Caleb and Gabriel remained as my front line Fighters, which proved serendipitous as two characters are often needed to block doorways as a vital means of crowd control, and Ophelia could still slide into her role as Rogue with no difficulty. Ishmael saw the most changes, for he now had to dual class as both my Mage and my Cleric, being my all round spell caster of both healing and offensive spells. On reflection I think I should have gone with "Gabriella" instead just to keep the even gender balance, but on the whole the party still seems to work.

Beyond that, I also started a read through of much of the fan fiction written by Eric J. Juneau for the first time in many years, either while I was travelling on my phone or when I was back home on my Windows 98 computer. I had time to burn when I was stuck up late at night checking on my livestock while lambing and calving in the spring, with Scribbles the cat watching over me from Microsoft Office 97 as God intended.

That God being Tchernobog of course. He has a soft spot for animated office assistants made of paper. The more you know. Tchernobog (talk) 22:19, 12 January 2023 (EST) 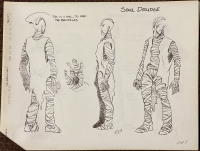 2022 may be remembered most in the retro first-person shooter community as the year of leaks. For most, the one to remember was the the release of a 2001 beta version of Duke Nukem Forever, but we have also seen more from the same studio with a 1995 version of Prey and even the original 1996 DNF platformer. Most recently, a newer version of the Blood Alpha from July 1996 has hit the internet, although we have long had the version from February so this news is not quite as momentous as some sources are reporting (not even the remarked upon tensions with Ken Silverman were unknown before). Some would also argue that the released version of Blood II: The Chosen was also a beta version, having never quite fulfilled the lofty ambitions it set out to reach.

On an even brighter note, we were also provided some authorized joy from the Apogee archives. Scott Miller was kind enough to share some previously unreleased concept artwork at the end of the year, as well as some magazine scans. His newly revamped Apogee (separate from the currently Embraced 3D Realms) seems to have a particular soft spot for Blood and the others that got away. The revelation that the Bone Leech and Soul Drudge actually date back to the drafting of the original game is utterly mindblowing. 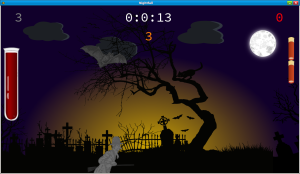 My year on the wiki got underway with a revamp and expansion of the List of Realities article, filled to the brink with the finest fan cruft, followed by a year long revamp and expansion of the Monolith Productions history sections (whose legacy has been further solidified on gog.com in the past year). As is often the case, my activity rate picked up towards the end of the year with a fan artwork crawl in August (still have an array of tabs to sort through all these months later), coverage of NBlood forks in September, and most notably the completion of several more developer biographies as well as updates to existing ones towards the end of 2022.

I also finally finished a project I began way back in 2012 of transcribing all of the objective text from Blood II: The Chosen onto their level articles, using Gordon Threemen's excellent 20th Anniversary let's play as a guide. All inspired by my finally replaying Blood II through Wine after all these years to break up my trek through each Quake on my shiny new laptop, with my having cheated on this place with several other game wikis. My plans for the coming year are to finish a revamp of the level articles I first envisioned in 2018 as well as finally documenting the Blood and Blood II strategy guides that have been collecting dust on my shelf of forgotten lore.

I also dipped my toes in bloody waters with my Halloween game Nightfall, a modest ghost ride with a perhaps somewhat familiar heart powerup. I actually have plans for an expanded version this year with potentially even a few more Blood allusions. In addition, I finally worked my way through the depths of Dusk and faced off against Stephan Weyte's Nyarlathotep. Overall while fun enough, the game did not quite jell well enough to me to be worthy of the moniker New Blood, seemingly lacking something in character compared to its inspirations. Perhaps Cultic may scratch that particular itch, should it land on my preferred retailer and platform down the road, and Grim Pray did offer up a tasteful nibble. Until then, there are still many more fan add-ons I have yet to experience. Gideon (talk) 23:52, 11 January 2023 (EST)