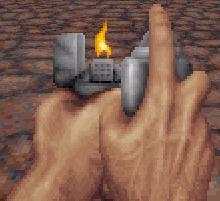 "Hairspray may not seem like the most daunting weapon, but apply it to a cigarette lighter and you've got an instant flamethrower (don't try this at home). While its range is rather limited, its effectiveness is quite impressive. You can also light one up like a Molotov cocktail and toss it into a group of adversaries. Hit alt-fire a second time after igniting a can to drop it at your feet-it will explode once it burns down."--Blood Manual

The Aerosol Can is a weapon in Blood, occupying slot 7. Caleb holds his lighter to it and uses it as a flamethrower. This sets the victim on fire, causing damage even without needing to continue to fire the weapon. Its range is limited, but the alt-fire turns it into a molotov cocktail, setting objects and people ablaze in a rather large splash radius. Monolith Productions warns players not to "try this at home". Credit for the idea for the weapon has been claimed by head designer Nick Newhard. A version of the weapon also appears in the officially recognized Postal 2 total conversion Eternal Damnation; this is likely the weapon specifically stated by the mod's developers as inspired by Blood.

Though the concept behind the aerosol dates back to 1790, the first can was invented in Oslo on November 23, 1926 by Erik Rotheim. It was not until 1939 that a patent was filed for a disposable aerosol spray can and not until 1941 and beyond that it began to attain popularity. Likewise, the Zippo lighter Caleb uses to ignite the aerosol spray would not be produced until 1933. This makes their inclusion in Blood, retroactively dated as 1928 in Blood II, somewhat historically dubious; one of many anachronisms that the game's developers felt more than welcome to add. although this historical inaccuracy is rather tame in a setting with Tesla cannons and Voodoo Dolls

According to Richard "Levelord" Gray from a development interview, the spray can was originally capable of actually painting walls and objects.

"Okay, okay, okay. Here's one BLOOD-y novelty that I can spill: there is a spray can to be found in BLOOD and it can actually be used to write on walls, furniture and even dead bodies. You remember how fun this was from your childhood, I presume. Sounds kind of silly though doesn't it? I mean, why bother with graffiti and vandalism while you're trying to rid the world of its ultimate evils? Well, if you had the unabridged edition of childhood like I did, you'll also remember what fun it was to put a lit match in front of spray cans, ...remember? I'll just leave it at that and hope you'll think of this when it's time to toast some Tarantulas."--"Level Designing for Blood", CD-ROM Multimedia Magazine