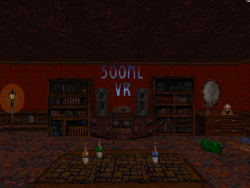 "6 new Blood maps made by various users from 4chans's /vr/ board. Features custom textures and cool midi's, hope you like it."--Description

500 Milliliters of /vr/ is a community add-on by members of the /vr/ board on 4chan released on February 1, 2021. It features six levels created by three authors, and features numerous replaced assets. Four levels are available for Bloodbath.