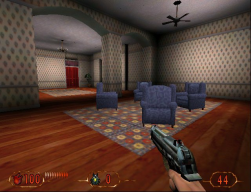 The level begins as she breaks in through the basement. After destroying a Behemoth, a vortex appears and Caleb emerges. Confused, he looks around and deduces Ophelia's secret. Embarrassed, she feebly tries to dissuade Caleb. Before more words can be exchanged, Caleb disappears through another vortex.