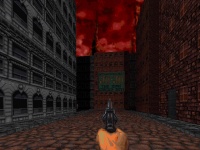 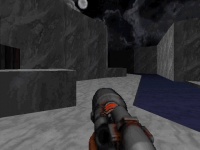 "Just like the name states, it's a modification for Blood which allows using custom weapons. From revolvers to new bloody shotguns! Of course since Blood's modding is limited, the mod only allows replacing current weapons, but aren't you bored playing the same weapons for years? Maybe you want to play fun mode by installing Triple DZ or maybe Hardcore mode by choosing PowerSlaver revolver? The choice is yours! DosBox is recommended to play this mod, but BloodGDX supports this mod too, since GDX uses BLOOD.RFF and SOUND.RFF. Sadly, some hacks will not work since GDX does not use Blood.exe. Nevertheless it's possible to use custom weapons too."--NoOne

The Weapons Mod is one of the only true game-play modifications made for the original Blood, originally starting out as a feature for the Alone in the Dark fan add-on. It mostly replaces weapons with their Blood Alpha versions, save for the Tommy Gun which gets replaced with the Riot Shotgun from Shadow Warrior and the inclusion of the twin pistols from PowerSlave (Exhumed) over the Tommy Gun.

It was released on November 17, 2012, and features an batch file to allow for the installation of each particular weapon (noting that the alpha and riot shotguns are mutually exclusive). It was packaged with Final Alone in the Dark.

The mod was later reissued as a version 1.2. It changed the double revolver into a single revolver, as well as other slight tweaks to their characteristics. Version 1.3 added tweaks to the Life Leech. A version 2.0 was later released on September 16, 2016 that brought the roster up to 12. Version 3.0 was released on September 6, 2017, with increasing assistance by Dzierzan, bringing the roster up to 18. Not all of them can be used simultaneously, as many reside in the same slots.

All versions were made by NoOne (aka Dimon), and a version is included with his New Alone in the Dark modification, as well as the semi-official version 1.3 of Bloody Pulp Fiction. It presently has limited compatibility with BloodGDX and NBlood, due to its reliance on functions of the original executable.

In addition, the mod packs in these extra features: