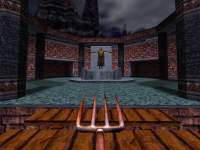 "Transfusion plunges you into a world originally created in 1997 by Monolith Productions. Created with the BUILD game engine (Duke Nukem, Shadow Warrior), Blood was a tour de force of horror that has yet to be matched, in which you battled minions of evil in a lightning-paced, blood splattered quest for glory. Thrill to new, enhanced special effects not seen in the original as you guide Caleb along his gory quest through a 3-dimensional world of horror. But the fun is just beginning then... When Tchernobog's Cabal has fallen, there's millions of challengers vying for your throne out there in cyberspace. Be sure to hone your skills against the enhanced FrikBots before defending your title in online bloodbaths. No need for Caleb to do all the work either - you can battle online as any identity you choose by selecting from the character library or by downloading new identities from the internet."--Official description

Transfusion (formerly known as QBlood, also sometimes referred to as BloodBath) is a project started in March 2001 to recreate Blood under the DarkPlaces engine which is a modified Quake engine. The Transfusion project aims at recreating the Blood levels, as well as the "Post Mortem", and "Cryptic Passage" episodes from the Blood expansion packs under a truly three dimensional and free software engine. Currently the game only supports BloodBath games, though unlike Blood it supports bots using the largely waypoint based FrikBots (mirror) system (added to games by pressing end or pageup); similar to the Open Quartz project. Since 2007, the project has been effectively dormant, although being open source software it could be launched again pending any interested contributors.

"Infogrames is prepared to give the qBlood developers/publishers a royalty free quitclaim license to use the copyrighted materials in Blood and Blood2 for purposes of this one project. We will not license the trademark Blood or any variation that incorporates the word Blood, including Bloodbath. Let me know if these terms are agreeable and the name and other pertinent contact information for the licensee."--Infogrames, July 24, 2002 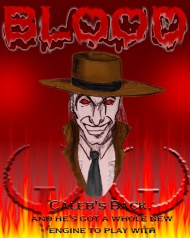 "Transfusion is our initial project, using the Quake 1 engine. Originally called just 'qBlood', it has been renamed to 'BloodBath' when we decided to switch to the Quake 2 engine in December 2001 and to make our Quake 1 game multiplayer-only. The game name has changed a second time to 'Transfusion' after we talked with Infogrames (now Atari) about the Blood trademark and copyrights... Transfusion II: Caleb's Awakening should have been our next project. Its development started in January 2003, after Transfusion first official release, but was quickly frozen (mainly because of a lack of coders). It has eventually been abandoned. Unlike Transfusion, Caleb's Awakening was based on the Quake 2 engine. The main goal was to remake the single player part of Blood, although support for the same multiplayer modes than those available in Transfusion was also planned. The team finally decided to bring the necessary changes to Transfusion for the single player support instead of restarting a complete development with another engine."--Transfusion website

The Transfusion project began as the qBlood or QBlood project in March 2001 shortly after the end of the Blood Source Campaign. It started out as a project to make a BloodBath modification for Quake deathmatch. In January 2003 they decided to make a single player version called "Transfusion II: Caleb's Awaking" which would be powered by the free software Quake II engine. However they later decided to add single player functions to the original Transfusion as that would easier then starting from scratch in the Quake II engine (Transfusion later switched to the DarkPlaces engine fork of Quake). Transfusion also once appeared in a gaming magazine in a section discussing mods. Both version 1.0.0 was completed as well as a beta version sporting, most notably, superior models. These versions were reviewed by the Blood Wiki, Free Gamer, and Linux Gaming News in 2009. 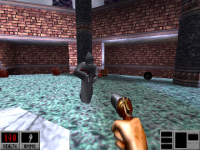 The main goal was the completion of the single player mode - with such daunting tasks as coding in enemies, duplicating all of the levels, and adding in all the game's minor touches. The project went into a slump between 2005 and 2007, mostly due to departing staff. At one point in 2005, a project member even attempted to solicit help from the Linux Game Tome "Game of the Month" team to acquire more contributors. In 2009, it began to heat up again and in March 2010 discussion ensued over possible making Transfusion more friendly a platform for modding, and allowing material not identical to Blood itself into the project under certain conditions, as an attempt to add new life. This was followed in April 2010 with discussions on how to get the project developed again.

While the game has been able to be loaded in more recent builds of DarkPlaces, issue are present such as camera shake and other graphical problems. The old Linux binary for 1.05 beta 2 also suffers from obsolete sound paths, though this can be avoided by using the Windows release through Wine. Alongside Blood II, the game has been played as part of the semi-annual Halloween BloodBaths. Other options for bot play include Q3 Bloodbath as well as ZBloody Hell or similar projects using ZCajun and others; player versus player meanwhile is supported by most source ports and Fresh Supply. The aforementioned ZBlood family as well as BloodCM also feature recreations of the Blood single player to varying degrees of accuracy; no true 3D attempt has currently surpassed Transfusion in playability given the challenge of recreating the assets as models.

"ReBUILD is a project founded in August 2000 by Timothy Hale and Mathieu Olivier, with the valuable help of Greg Enright of the BloodSource campaign. Those 3 fans of Monolith Productions' 3D-shooter Blood wanted to revitalize/modernize the editing tools for BUILD, the engine on which Blood is based, and to gather technical informations about Blood, so people would have a set of good tools to work with when the Blood source code would finally be released. At this time, Ken Silverman had just released the source code of his BUILD engine, and so many people thought the Blood source code release was a matter of weeks. Unfortunately, this release didn't happen. Timothy, Mathieu and Greg then decided to move on and founded qBlood (now known as the Transfusion Project) in March 2001. As a consequence, there isn't much activity on ReBUILD nowadays, although the project isn't officially dead. If you want to get support or information about the ReBUILD Project, contact Timothy Hale or Mathieu Olivier via the Transfusion Project."--Project website 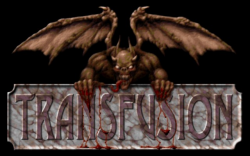 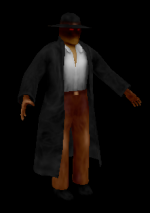