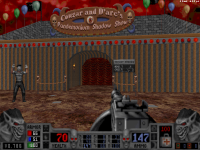 The Clowny Arena (TEDE1M8) is the eighth and final level of the Blood fan add-on French Meat (2012). It features the entrance to a carnival, leading to a circus tent where Caleb faces a Cerberus and Stone Gargoyle.

The locomotive arrives at its destination, and Caleb awaits and massacres the Cabalists that arrive to inspect the car. A short walk away from the station is the opening for Cougar and D'arc's Pandemonium Shadow Show, and Caleb happily strolls into the big top chanting "I want JoJo!" Instead the cackling laugh of The Voice greets him, and out comes another Cerberus accompanied by a Stone Gargoyle ready for the final showdown, which Caleb then obliges them.

"A fitting end map I suppose! But it felt rather Anti-Climatic to me, it seemed sort of rushed and quickly compiled together, you have a short excursion from the train to the inner arena and a slew of goodies before the showdown begins but somehow I was expecting more then just two boss encounters. I was hoping for executed groups of enemies before facing the Dreaming One himself as he would have been pretty tough in those circumstances, was their meant to a credits screen of sorts? Because it just chucked me back to the start with the level restarting after killing Cerberus... Well this really was a masterful mod all in all, the quality was high throughout and consistent and it was also a very tough odyssey throughout with the continual use of ambushes as I already mentioned, I'm surprised to hear you want to craft a 2nd episode! That may well take another 5 years potentially."--Krypto