"This high-caliber weapon is ideal for hitting targets at long range. Aided by the scope this weapon can hit targets at an extreme range for good damage. The damage this weapon does is very dependent on where it hits. Hitting the head or torso does major damage, whereas nicking the torso or hitting a limb does less damage."--Blood II: The Chosen Manual 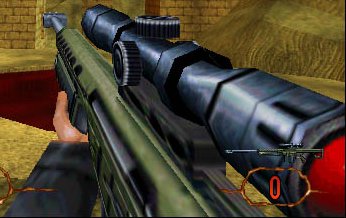 A Sniper Rifle, also known as the Barrett .50 BMG Sniper Rifle is a weapon in Blood II: The Chosen. It is a long range, high-powered rifle with a low rate of fire and severe recoil. This makes it ideal for taking out targets from long distances, especially when combined with the scope, but unsuitable for a fire fight. Fanatics sometimes use sniper rifles, but rarely use them properly. It is also Ophelia's signature weapon.

The sniper rifle bullet was developed by John Browning for a .50 caliber heavy machine gun. The round was so accurate that machine gunners started using their weapons as makeshift sniper rifles. The BMG was designed as an anti-material weapon, but works just as well on personnel.

"Sniper rifle... for when you want to reach out and touch someone... like blow their head off!"--Caleb