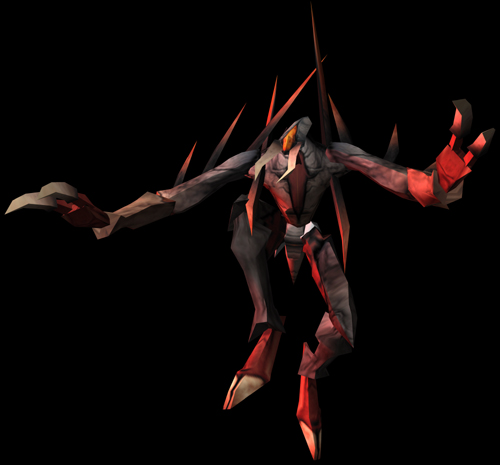 "The Shikari is a pure predator. It hunts in packs or alone, and has excellent tracking and sensing abilities. Very mobile, it jumps and runs. When it reaches its prey, it rips and devours in a ferocious frenzy. If something gets too close, it will attack viciously to protect its kill until the meal is complete. "--Blood II: The Chosen Manual

Shikari are a common enemy in Blood II: The Chosen that are the first enemy encountered from Reality Beta, along with Bone Leeches and Thieves. They are bipedal insectoids that are very quick and deadly. They can be recognized by their trademark hissing and squealing which calls other Shikari. In addition, the manual states that they have an acute sense of threat assessment. Like a pack of wolves, they will hold off from attacking a more powerful creature until it shows weakness.

The Shikari are described as "pure predators". It is extremely intelligent and has excellent senses. It is capable of attacking in a group or alone with equal deadliness. Their lithe bodies make them fast and agile. They can jump from long distances and climb walls using their hooked arms and legs. They attack by spitting acid, clawing, or spinning around and shredding the victim with their spiny protrusions.

Shikari are definite threats in the environment of Blood II. Shikari like to gang up on the player, making escape difficult, and their claws and acid are highly effective at doing damage. Even a lone Shikari or two mixed with enemies with firearms often yields death. Plus Shikari can take quite a bit of damage, making them one of the deadliest enemies in the game. They are mostly vulnerable to fire or acid.