Sectant is a Blood add-on by Zik of the Russian Blood Community announced on December 27, 2006; later followed up with the stand-alone Sectant 2.

"You are now Caleb and Irik Weiner, an ordinary man whose family was killed by cultists! But there would avenge them Irik enrolled in a sectarian cult Chernoboga. On was now making their way through the crowds of monsters to kill Faust tries Irik-son Chernoboga."--Translated description

"So John began his Times story... I came home, strangely enough, it was quiet ... Elevator was broken, but it worked an hour ago! The door was open ... Mary, Mary, you are at home ...? The bedroom was locked, I found the key and ... NO ... NO ... NO! I had to join the sect, yes, to find the killer ... The original idea ... John will visit the temple of the sect, City tryuscheby AND zhertvoprinasheniya hall, and even within his own nightmare visit (during sleep)."--Translated description

The second release contained seven levels, with "Lightly Broiled" being the recommended difficulty.

Zik has also created two other smaller add-ons for Blood, as well as a handful of stand-alone maps hosted on the Deep Cold Grave website. Each map has a different back story, mostly revolving around common themes of vengeance and revenge, with a few having more distinct story lines such as fighting in a town being taken over by a virus or tracking down a murderer.

"Bill bastard! He lent me 100 bucks and smylsya. Ya obliged to take the money and koknut Bill!"--Translated description

This set contained three levels and was his first add-on. Announced on December 24, 2006.

"In 2042 the U.S. has created an underground provitelstvo labolatoriyu to study the new virus X. But a failed experiment, the virus escaped from the laboratory and echoed through the city ... You play as an ordinary guardian of the 6th sector John Silver..."--Translated description

This set contained four levels and was announced on January 7, 2007. 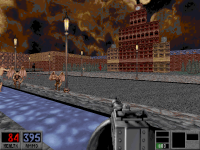 << Alone in the Dark | Old Friend >>
Retrieved from "https://www.blood-wiki.org/index.php?title=Sectant&oldid=43009"
Categories: